Ex Calling Song featuring Avneet Kaur is the latest song by Rohanpreet Singh and Neha Kakkar. Let’s read the English translation of the lyrics of this intriguing song. Babbu is the songwriter of appealing Punjabi lyrics, and Enzo is the composer of pleasing music. Below, you might want to read the lyrics of the Ex Calling Track with their meaning. 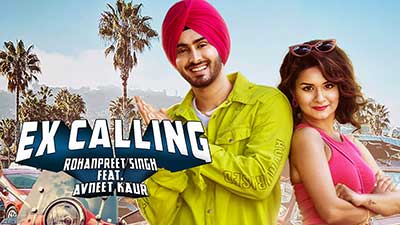 Tuhi Todi Si Majboori Thodi Si,
Main Rokeya Si Tainu, Meri Gall Tu Modi Si,
You’re the one who broke up first. It wasn’t a situation of helplessness.
I was trying to stop you, but you refused to listen to me.

Han Todan Vele Gall Da Vi Mauka Tu Nai Dita,
Eh Koyi Gall Ban’di Ae Hun Milna Tu Chauni Ae,
When you broke up with me, You didn’t give me a chance to have a conversation with you.
Is it sensible that you’re trying to meet me now?

Aape Chhaddeya Si Tu Mainu Ohde Karke Ni,
Ohdi Hoke Hun Tu Mainu Phone Kyun Launi Ae,
You willfully broke up with me just because of him.
Now, while you belong to him, why do you call me?

Han Main Tan Khush HAa, Ki Karaan Je Hun Tu Khush Nai,
Tu Mere Layi Ex Ton Vadhke, Hun Tan Kuchh Nahi,
I’m very happy on my own. What can I do if you’re not happy?
Now, for me, you are nothing more than my ex.

Chalo Chalo Hun Hato Ji, Mitti Na Patto Ji,
Hun Koyi Fayda Nai, Tusi Phone Nu Katto Ji,
Let’s get it over with. Let’s not dig old graves.
There is no point in all of this. Please, hang the phone now.

Han Tere Layi Story Koyi Hun Nai Payidi,
Tere Matlab Da Nai Kuch, Jo Dekhan Aundi Ae,
I’m no longer sharing any social media stories for or about you.
There’s nothing of your interest in my social media, so why come and check it out?

Aape Chhadeya Si Tu Mainu Ohde Karke Ni,
Ohdi Hoke Hun Tu Mainu, Phone Kyun Launi Ae,
You’ve willingly broken up with me just because of him.
Now, while you belong to him, why are you calling me?

Ache Deve Man Ke Sache Deve,
Ehi Keh Sakde Han Rab, Thonu Bache Deve,
May God give you children who are good and truthful. That’s all I could wish for you.

Han Changa Bhala Hai, Agla Tera Dil Ton Karda Hou,
Kahton Oh Vichara Bewakoof Banaundi Ae,
He (your beloved) looks pretty decent. He must be genuinely in love with you.
So, why are you making him a fool?

Han Changa Ji Tusi Khush Raho, Par Apne Ghar Raho,
Mainu Pyari Jehi Nu Tu Kyun, Gussa Chadhauni Ae,
Oh, my dear, may you be happy. But please mind your things, and live happily in your life and your house.
I am such a loving person. Why are you making me angry?

Aape Chhadeya Si Tu, Ehnu Ohde Karke Ni,
Ohdi Hoke Hun Tu Ehnu Phone Kyun Launi Ae Ae,
You deliberately broke up with him (my boyfriend) only because of the other guy.
Now, while you’re with the other guy, why do you call my boyfriend?