Game Song by the duo of Shooter Kahlon and Sidhu Moose Wala is the much-awaited Punjabi song. Read the lyrics of ‘Mere Te Nazar Rakheyo’ track with translation in English. Sidhu and Shooter both have scripted the lyrics for their verses. Vipul Kapoor is the composer of music. Game Lyrics are going to be the first release from Sidu Moose Wala’s music company titled ‘5911 Records.’ 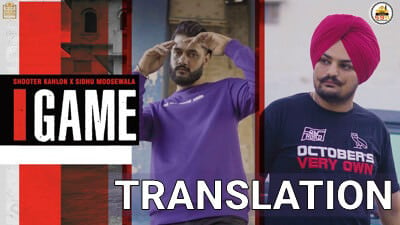 Sidha Ae Sanket Mera Rishtedaran Nu
Marha Dekh Mainu Shad Chukiyan O Naran Nu
I am referring directly to my relatives here, and also to the girls who underestimated me and left me.
Socheyo Na Kache Pair Jatt Dig Jauga
Jide Aya Samne Tan Changi Tarah Aunga
Don’t think that I am not settled yet, and I am going to fall. But the day I will come forward, I will come prepared.

Diary Vich Nam Dagebajan De Ne Chepne
Khad Ke Stage-ey Mein V Sabh Ne Lapetne
I want to jot down the names of all those who cheated, back-stabbed me. And one day when I get to the stage, I’m going to criticize them.
Je Chhati Deu Himmat Tuhadi Os Time Te
Veere Karke Himmat Haseyo
If you had enough courage, would you laugh at me then?

Jan Da Si, Jan Da Si Jan Da Si Thonu Tusi Apne Moohoan Daseyo
I used to know you. I’m known to you.
Nazar Rakheyo Nazar Rakheyo Hun Mere Te Nazar Rakheyo
You are going to tell this to others when I get famous and successful.

Jag Utte Hunda Ni Koi Bheti Oye Lekh Da
Dasda Ae Samaa Aithe Kon Kide Mech Da
No one in this world knows what fate is going to bring next. Only time is powerful enough to show who is more competitive.
Tutde Hunde Ne Dekhi Rata Nu Jo Supne
Ha Maye Tera Putt Akhan Khuliyan Ch Dekhda
The dreams that are seen in the night, I saw them shattering. But, dear mother, your son dreams with his eyes wide open.

Ho Mere Ch Pyas Pani Aap Aau Chalke
Tikda Ni Koi Jagah Kise Ali Mallke
I’m thirsty, and the water is going to run to me. No one lasts for a position that has been snatched from the rightful.
Ho Ajj Chad Ohda Kujh Kal Vi Ni Banada
Mehnat To Bina Jihdi Nigah Hundi Fal Te
Not only today but tomorrow, too, such a person will be nothing. The person who is seeking to have fruit without hard-work.

Duniya Ne Rang Nit Nave Hi Dikhaune Aa
Kise Ne Fadaune Hath Kise Ne Chhudaune Aa
Every day, the world tends to show new tricks. Some are going to support you while others are going to give you up and escape.
Ho Sab Same Hath Jadon Ambran Nu Paune
Fer Khad Ke Jarur Takeyo
But when I touch the stars in front of everyone (get successful), you’re all supposed to watch me.

Ek Seega Time Lok Taane Seege Kasde
Midle Clas Banda Mainu Seege Dasde
There’s been a time when people used to taunt me. And address me as an individual in a middle-class family.
Paise Nal Judge Karde Seege Aukatan Nu
Shaklon Ni Sohna Bai Akh Ke Si Hasde
They used to judge my ability against money. “I am not good-looking at all”, they said and laughed at me.

Jurrat Chahidi Jang Zindagi Di Jittne Nu
Balleya Mukam Ethe Shaklan Ni Laindiyan
One must be brave enough to fight and win the war of life. Not only is the handsome face good-enough to achieve the goals.
Ohi Hoyi Galla Reet Duniya Di Change Hoi
Palle Seega Cycle Te Cycle Toan Range Hoi
And that’s what happened, and the tradition has changed. I only had a bicycle, and later I owned the Range Rover.
Mardi Ae Gallan Sali Duniya Ta Vehli Ae
Hun Dekh Gt Road Utte Kille Di Haveli Ae
People say anything because they don’t have anything else to do. And see, Now I’ve got a mansion in an acre of land on the GT road.