Translation for lyrics of ‘Kannazhagu Rathiname Song’ featuring Dhanush from his latest movie ‘Asuran’.Vetrimaaran is director, GV Prakash composes the track hummed by Dhanush himeself, with impeccable songwriting of Yugabharathi. Get to know meaning of this track’s verses. 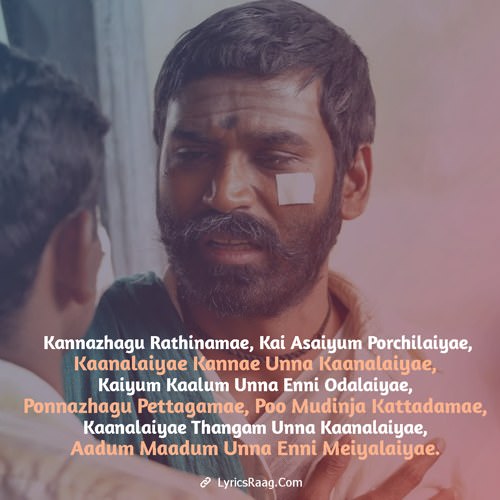 My precious, pearl-eyed prettiness! My marvelous masterpiece!
Where have gone, sweetheart? Where have you gone?
Forlorn in your absence; I can’t seem to move my limbs.

My beautiful, beloved boon! My home adorned with bloom!
Where are you, my dear? Where are you?
Forlorn in your absence; Our cattle refuse to graze.

Kannazhagu Rathiname is a sad track filming Dhanush from his most recent Tamil movie ‘Asuran’. He also has lent his voice for this praiseworthy song, as well as he acted in it. Yugabharathi is writer of Tamil stanza and G.V. Prakash Kumar is director for music.

Vetrimaaran is director of music video for ‘Kannazhagu Rathiname’ and here you may read the meaning of full song lines with their explanation in English language. The movie was released on 4 October 2019 while the music album was released in Aug 2019.