Maara Theme Tamil Song with lyrics from “Soorarai Pottru” movie is a vitally a spirited music number. Suriya has voiced the anthem and G. V. Prakash Kumar has given it a significant music direction. Arivu is the lyricist who came up with Maara Theme lyrics, read them below. 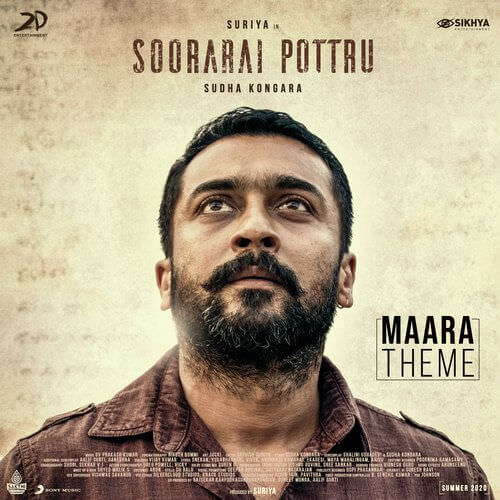 Maara Theme song is a just-released track and the first music piece released from Suriya’s upcoming Tamil-language action drama film ‘Soorarai Pottru.’ Sudha Kongara has directed the film, as Suriya and Guneet Monga are the main producers. Similar to all other soundtracks from the film ‘Maara Theme’ also has music direction from proficient music composer G. V. Prakash Kumar. Arivu pens the significant Tamil lyrics for this track and Suriya himself has lent vocals for it.

Suriya will be playing as Nedumaaran Rajangam “Maara” while opposite to him Aparna Balamurali will be portraying as Bummi/Sundhari. Sony Music Entertainment India Pvt. Ltd. has acquired music rights for the Soorarai Pottru movie songs.