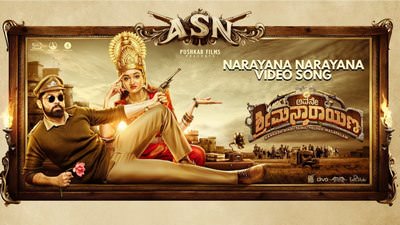 Alas he has descended a version of the Lord himself
Why do you need a Ray-Ban to adorn you?

A messiah! A savior!
A warrior who has arrived just for us.
Show us your original form already!

Let us join our palms. Why have a doubt, let’s just ask him.
Why the gun? Where is your mighty bow and arrow?

When the vermilion adorns his forehead looks like a mark of victory.
A shining star, the apple of our eyes. oh, such a charmer you are!

A messiah, A saviour, the whole world considers you so.
There is festivity at every door you enter.

For the beautiful Lakumi.
She’s so cool.
Naryana is so full of love.

Wholeheartedly, the brilliant star is showering them with radiance.

They are now the talk of the town.
Let every sound become music.
Sir, add some more weight.
Come on down. sir!

A messiah. A saviour.
Lakumi’s better half.
Aren’t they a match made in heaven?