At the moment, while we all wait until the next devotional drama by Nayanthara, Mookuthi Amman, is released, the filmmakers decided to release the movie’s first single track dubbed as ‘Aadi Kuththu.’ The track is hummed by world-famous LR Eswari, who is very well renowned for her religious goddesses tunes. The song begins with Nayanthara grinning as the iconic tone of LR Eswari begins the song. Folks in a shrine can be seen as exciting dancing as the music continues. 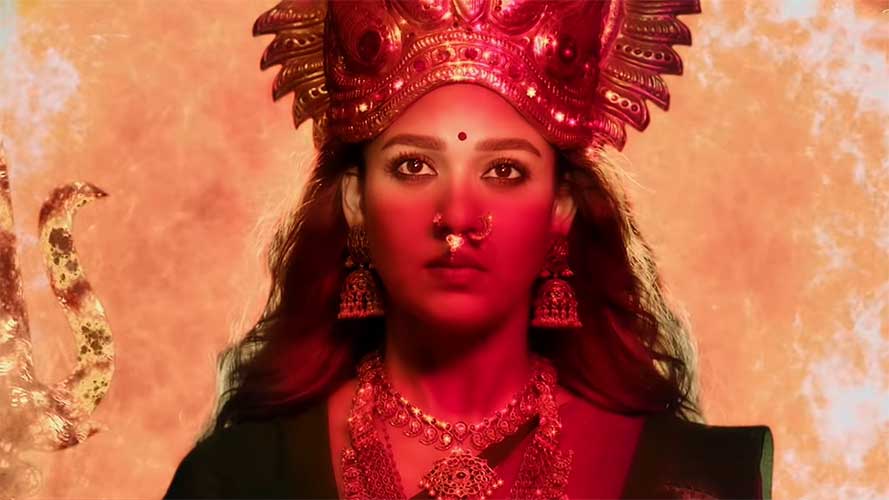 The composition, arrangement, and production of Aadi Kuthu was handled by Girishh Gopalkrishnan and performed by LR Eswari with Pa. Vijay’s satisfying lyrics.  Mookuthi Amman was written and directed by RJ Balaji and NJ Saravanan, and the leading star is RJ Balaji and Nayanthara. The film Mookuthi Amman, produced by Ishari K Ganesh under Vels Films International, also stars the main roles of Urvashi, Ajay Ghosh, Mouli, and Smruthi Venkat. Girishh Gopalkrishnan has been working on the film’s music score, which should be broadcast on Disney+ Hotstar VIP during Diwali on 14th November 2020.

The creators released Mookuthi Amman’s trailer on October 26, which collected immense positive reactions from the viewers and fan base. It was initially suspected that the film would be a parody one. Yet, RJ Balaji clarified and said it would be a religious drama. On May 1, the makers promised to release the motion picture. Yet it wasn’t because of the lock-down.

Catch the Tamil language trailer written and directed by RJ Balaji and NJ Saravanan by Mookuthi Amman. In the leading roles, the film stars Nayanthara & RJ Balaji. Generated under the name of Vels Film International by Dr. Ishari. K. Ganesh, Mookuthi Amman, has a leading role in Urvashi, Ajay Ghosh, Mouli, and Smruthi Venkat. Girishh Gopalakrishnan has played music for the film to be launched from 14 November 2020 on Disney+ Hotstar VIP.