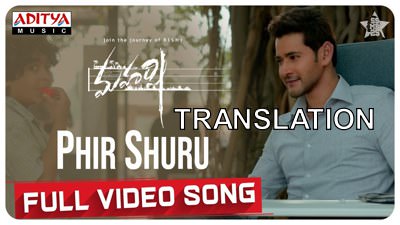 Phir Shuru Lyrics with encouraging voice of Benny Dayal is another song of Maharshi film. You can read the translation of its lyrics to know the meaning of Phir Shuru full song lyrics by Mahesh Babu.

Sudigaalini Kosi Dhaarini Theesi,
Dhuke Pranam La,
Passing through the cyclone wind and laying a path like a shooted arrow.

Phir Shuru!
It has started again.
Chal Guru!
Come on, my friend.