Radhai Manathil Song Lyrics Ft. Jyothika from the Tamil movie Snegithiye with the translation of its fun lyrics in English. The vocals in playback are from K. S. Chithra, Sujatha & Sangeetha Sajith. Learn the meaning of Radhai Manathil lyrics below. 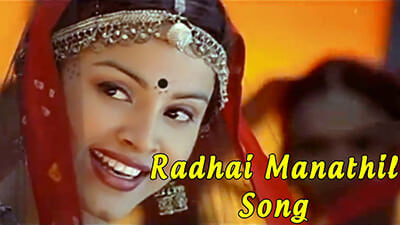 What is the secret in Radha’s heart?
Both the eyes are twinkling,
Come Kanna, to find out.

In the white night where moon glitters, Kodhai Radhai walked.
In the bamboo forest, when music was heard, she was shocked.

The way the music came, dancing & flying she forgot the way.
In search of a dress to cover herself, she pulled the moonlight.

She has reduced the heartbeat,
Shivered to see the shadow,
The girl searched by Kannan fainted, losing herself.
The heart is not in a place where I’m.

The flute played by Kannan will kindle the breeze and will attract like a magnet.
When maiden comes, It’s Kannan’s routine to vanish.

Forest became dark, and her eyes become red.
Lovable Radha was roaming around,
I’m in search of her, and she fell into the river.

She was speechless & breathless.
She didn’t remember the way she came.
She doesn’t know where to go!

If your flute sound comes, Radhai will have life-
Oh, My Kanna! Please, come here
Her life is struggling in the water
Kanna Come here to give life!

When Kannan touched, that girl opened her eyes,
Kannan didn’t touch her, but the wind did,
After knowing this, she was shocked.

Closing her eyes, she called Kannan
Where will she find the tears that she shed in the rivers?

She took parrot’s wing and flew towards the eastern side.
Getting cuckoo’s voice, she called,
Before she gets dejected & dies.
Oh, Kanna come here!
Kanna comes here to save my life the sorrows.