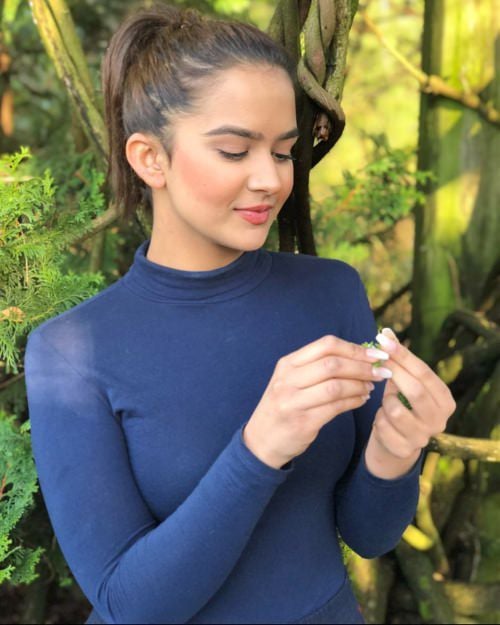 Roopi’s ambition was to become a police officer for which she studied. She just tried acting as a hobby but it’s all going so good, touchwood, she said.

The actress, model is Canadian born Punjabi. She was raised also in Canada and finished her schooling there. Roopi was most interested in acting since her childhood, withouting knowing that one day she could become such a popular actress in a really short period of time. She did her debut as modelling in Prabh Gill’s romantic song “Taareyan De Des.” The song has its music video direction from Sukh Sanghera. Sukh is one of the most experienced and demanding music video makers in industry. Sukh Sanghera trusted Roopi’s talent and hardwork and decided to give her an opportunity. Majority of Punjabi music listeners was charmed by Roopi Gill’s cute looks. Roopi is still working with Sukh Sanghera’s home production 10 Plus One creations. Later on Sukh & Roopi’s team worked more music videos which also received equally good response. She considers Sukh Sanghera as a mentor, elder brother who always guides her and supports her.

She is best known for acting in Gurnam Bhullar’s hit song “Diamond.” To see Gurnam Bhullar and Roopi Gill as a couple in music video, everyone liked and hope to see their chemistry in future projects.

And our charming girl wasn’t just meant for music videos, Mr. Sukh brought her a movie project named “Vadda Kalakar” in which Punjabi singer Alfaaz is doing lead role. After listening to the film script Roopi signed up and shootings are on. Soon the admirers would like to see the cutiepie in a full movie.