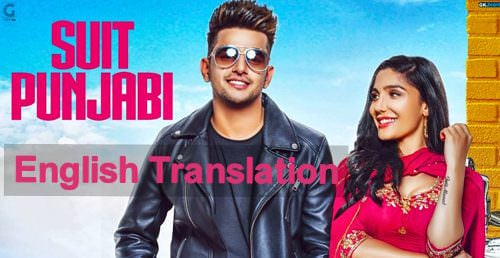 SUIT PUNJABI LYRICS with English Translation – The most entertaining song has been performed by none other than Jass Manak with its verses drafted by Avvy Dhaliwal. Shagur is name of music composer and music video of song is also out now. Get meaning of song verses on this page.

The jatti/girl has been hanging around in punjabi suit,
And his being followed by the people of whole downtown.

She has a very cheerful nature and meets everybody with pleasure.
I have never seen her with her dupatta/scarf take off from her head.

Saturdays she hangout in toronto searching for my permanent address.

The girl waits for me around the corner of the raod,
And says that my car has killer rims.

You’re fair skin is really slaying,
It hits the boys like a gun shot fired in their chest.

The movement of your eyes have taken my heart,
Half of the town is looking for me now.

You have been sending offers of love for manak,
But not that easily we loose our hearts to anybody.

The girl awaits me at the roadside and says that my car’s tire rims are so lit.

I have a golden heart even I have a rude nature.