Ravinder criticizes Ajooni for being reckless and considers her accountable for Aman’s health because of this. Later on, Ajooni is taken aback when she discovers that Aman had lied to her about being pregnant. 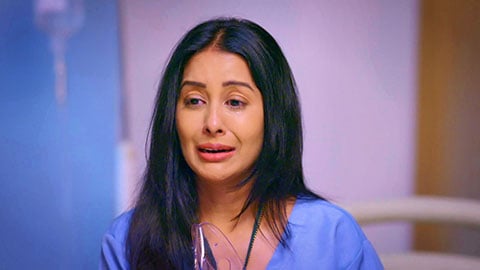 Let’s experience the written update for the most recent article of the stirring serial Ajooni telecasted on Monday, 26th September 2022. Rajveer holds Ajooni responsible for Aman’s predicament is the label of the brand-new episode number S1 E54.

The episode starts with Ajooni asking Rajveer about Aman. Rajveer informs her that Aman is in the intensive care unit. She inquires whether Aman is all right. He chastises her for abandoning Aman. She tells him that she is going to complete the paperwork.

He holds her responsible for Aman’s illness. He claims he made a mistake by trusting her. He informs her that she has come to meet Avinash. The doctor requests that he bring drugs. Rajveer instructs Ajooni not to move till he returns.

Bebe, on the other hand, returns home. She informs Dolly that she has placed an order for a swing. She requests that she bring Aman. Chamko tells her of everything. Bebe smacks her around.

She inquires about Dolly as to what transpired. Dolly holds Ajooni responsible for Aman’s illness. Bebe instructs her to contact Ravinder. Ravinder is asked what happened to Aman. Ravinder tells her every detail.

Ravinder questions Ajooni about why she left Aman alone. Ajooni tells him that the elevator was reserved for patients. He informs her that she is fortunate to be Mrs. Bagga. He chastises her for constantly failing him.

He describes her as a dreadful curse for Baggas. He reminds her of the theater she performed for Aman. He assures her that if anything happened to his grandchild, he would not spare her. Dolly tells Harman that she intended to harm Ajooni but that her plan failed. Harman chastises her.

Dolly informs her that Harvinder has requested her to notify him when Ajooni and Aman leave home. Harman reminds her that Ajooni, not Aman, is their aim. She claims that her grandchild is now in danger. Ravinder complains to the hospital trustee about the facility’s amenities. Avinash informs him that it seems to be a deliberate assault.

He admits that he observed someone leave the power supply room. The trustee claims that something is odd and that whoever is guilty will not be spared. He informs Ravinder that Avinash and Ajooni aided in the rescue of Aman. Rajveer is taken aback when he hears this. Ravinder admits to Ajooni that he chastised her harshly.

He expresses his apologies to her. He expresses gratitude to Avinash. He bestows blessings on Ajooni. Avinash eventually informs Ajooni that Aman was never pregnant. Ajooni questions Aman about why he lied.

Aman informs her that she has no option but to annul Harvinder’s marriage. She urges that they not tell Baggas the truth. Bebe begs God to keep their grandchild safe. Meanwhile, Avinash informs Baggas that they cannot rescue Aman’s kid. Ravinder is ready to assault Ajooni when Avinash steps in. Avinash tells Ravinder that someone planned the elevator catastrophe.