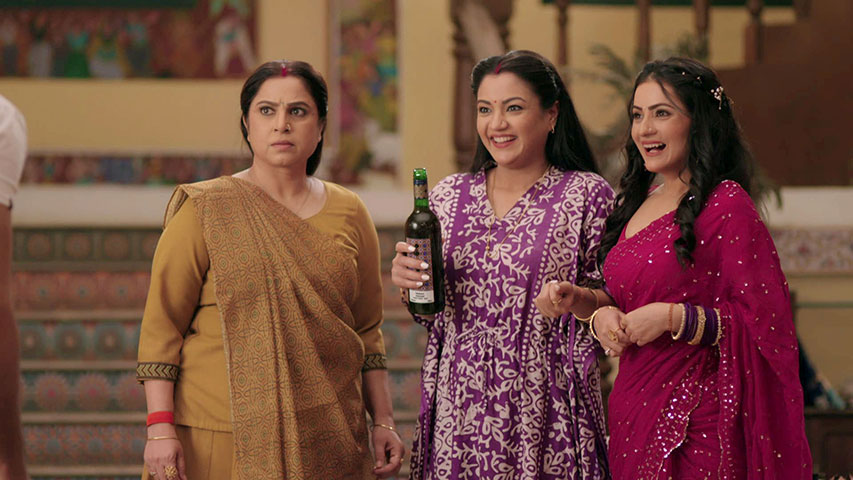 Gunjan tells Anandibaa what she has witnessed in order to create the impression that Emily is an alcoholic. Aarav maintains control of the situation by having Anandibaa believe that the substance in question is a herbal tonic intended for Emily.

Emily begins the episode by consuming the herbal remedy that was packaged inside the wine bottle. While she asks him to accompany her, Aarav tells her that she would undoubtedly benefit from it. While Gunjan and Pinky watch them, he sits next to her. By demonstrating to Anandibaa the evidence that Emily is an alcoholic, Gunjan becomes eager to kick Emily out of the home.

She continues to take images of Aarav and Emily while instructing Pinky to collect as many arguments as possible against the latter. Gunjan smirks as she considers her plan and claims that even God is with them since he is providing them with evidence to distinguish between Aarav and Emily. Emily explains to Aarav that in her family, if one person becomes unwell, the other person must sit with them and take the medication. Aarav is interested in learning about American culture and joins Emily in her seat to do so.

She shares her tea with him as she sips some of it herself. Gunjan assumes that Aarav is drinking alcohol since he is seen drinking with Emily. Pinky wishes to join Emily for a drink after learning about the traditions of her family, but Gunjan stops her and reminds her of their arrangement. She declares that they will need to be separated in order for Pinky to quickly locate Aarav.

The latter is inspired by the prospect of marrying Aarav and obeys Gunjan’s orders. While they are gone, Emily and Aarav are both thrilled since Jaman brought Emily a new bottle. Aarav presents it to Emily as a gesture of thanks to Jaman and tells her to sip the remaining liquid anytime she feels under the weather. The latter will enter as Jaman leaves the area.

Gunjan grins and picks up the phone to call Anandibaa to let her know what has happened. She goes into Anandibaa’s room and declares that Emily is an alcoholic while expressing her mistrust of her. Anandibaa is surprised and refuses to accept it as Gunjan displays a photo of Emily and Aarav enjoying a drink together. After being stunned, Anandibaa accuses Emily of destroying Aarav.

Anandibaa will now face Gunjan and question her about how she is aware of everything. She responds that she is watching Emily to preserve the traditions of her family. Anandibaa chooses to face Emily and Aarav because she respects Gunjan. Meanwhile, Emily stumbles there and finds it difficult to move there as Pinky accidently spilled soap water on the floor.

Anandibaa, whom Gunjan demonstrates to be drunk, claims she can’t even walk in Emily’s state. Anandibaa confronts Aarav after becoming enraged with Emily. The latter tries to converse with Anandibaa, but she keeps taking his hands away since she believes he has also drunk alcohol. She expresses her mistrust of Aarav and is enraged with both of them, but Emily allays her fury and explains that the wine bottle contained medication.

Jaman also learns that Emily’s medication was exchanged for a wine bottle and informs Aarav of this. He quickly switches the bottles and corrects Jaman. Gunjan, on the other hand, worries that Anandibaa will reprimand her, but she admires the latter for keeping a watch on Emily. Gunjan asks Pinky to fetch the album while deciding to exhibit Anandibaa, one of Emily’s previous photos.

Aarav is startled when Jaman alerts him of Kalandi’s presence, and vice versa.