Get the written update for the just out episode of the happy show Anupama released on Tuesday, 30 August 2022 on StarPlus. Kinjal Is in Pain is the label of the just released episode number S1 E669. 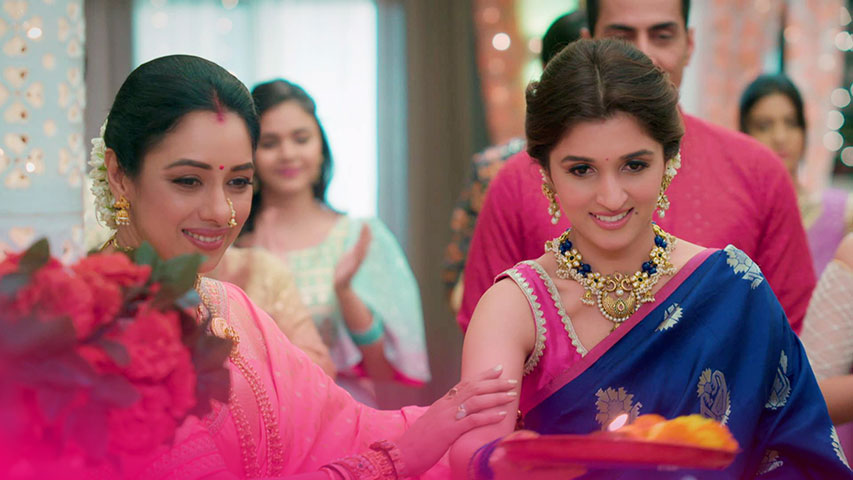 As the Shahs and Kapadias celebrate Ganesh Chaturthi, Kinjal gives birth. Anupama receives wonderful news, and Anuj is relieved that he can’t assist her.

In the current episode, Vanraj and his family pay a visit to Anupama. The Shahs are paved over by Adhik, Barkha, and Ankush. The family is welcomed by Anuj and Anupama. Puja is initiated by Anupama.

Hasmuk praises God for bringing Shahs and Kapadia together. Anupama makes the decision to do aarti. Sanjana gives Paritosh a call. He chooses to go see her.

Kinjal queries Paritosh about what transpired. According to Paritosh, he has received a call from a large corporation and must go to Mumbai for the next two days. He says that he has been applying for jobs at this organisation for a very long time. Vanraj inquires about the business’s name.

Paritosh promises to inform him of the specifics as soon as everything is resolved. Anupama asks Paritosh whether he can postpone. No, Paritosh answers. Paritosh receives pleasant wishes from Kinjal.

She becomes agitated. Anupama and Kavya comfort Kinjal. Anupama is waiting with her eco-friendly Lord Ganesh when Anu asks her to begin the puja. Leela wonders if Lord Ganesh is green.

Anuj gives an explanation of the green idol. Anupama and Shahs offer God’s prayers. Anupama begs Anuj to allow Ankush and Barkha to participate in the pooja as well. Kinjal has labour pains.

Kinjal is a concern for the Shahs. Anupama is invited to accompany Kinjal. Kinjal is looked after by Vanraj and Anupama. Anuj requests that Shahs hurry Kinjal to the hospital and end the waiting period.

Kinjal goes into labour, according to Kavya. Kinjal is taken urgently to a hospital. What has happened to Kinjal? Anu queries GK.

Anu is informed by GK that Kinjal is in agony since her baby is about to arrive. Anu is thrilled about the new arrival. GK inquires as to Anuj’s agitation. Anuj is restless since he is not with Anupama.

He says a prayer for Kinjal and Shah to be happy. Kinjal is driven to the hospital by Vanraj. Anupama is invited to accompany Kinjal. Anupama urged Kinjal not to worry.

Vanraj becomes agitated. Leela urges Vanraj not to worry. Anuj contacts Vanraj. Assuring him that Anupama is with Kinjal, he tells him not to worry.

An operation is performed on Kijal. The Shahs get wonderful news from Anupama. A daughter was born thanks to Kinjal. Shahs celebrate the news.