Explore the written update for the most recently published webisode of the interesting television broadcast Anupama brought on Wednesday, 7th September 2022. Kinjal Is Back Home is the tag of the cool episode number S1 E676. 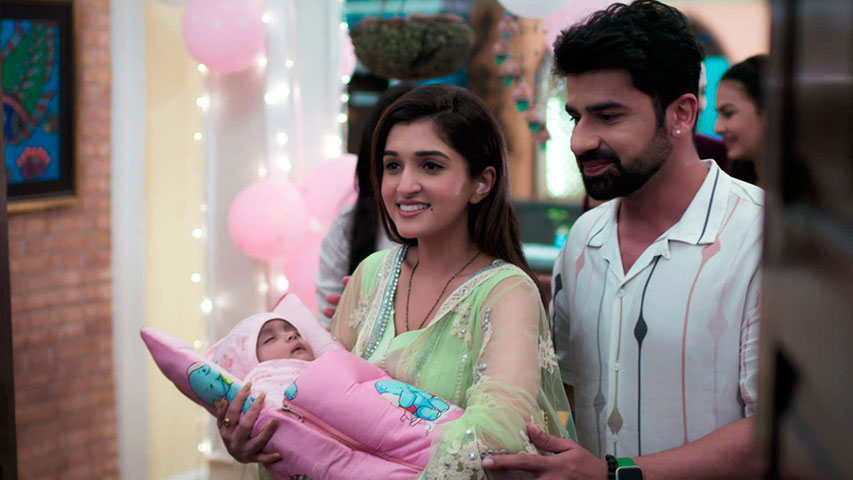 In the latest segment, Anu expresses to Anuj her desire to get acquainted with the newborn child. Anuj assures Anu. He requests Anupama start a video conference with Kinjal on his behalf. Anupama gives Kinjal a call and tells her that Anuj would want to speak with her.

Anuj entertained Kinjal and the infant as he reads them poems. He extends his condolences to Kinjal for not being able to meet her in person. Kinjal claims that she, too, regrets that she did not accompany the infant on her visit to him. She provides information about earning her release and going to see the Shahs.

Kinjal receives a promise from Anuj, who also tells her he will go to see her. In addition, he requests Anupama go to the Shahs’ residence while accompanying Anu. Anupama is unwilling to leave Anuj. Anuj assures Anupama that he is doing well and recommends that she visit the Shahs.

He expresses his melancholy by telling Anupama that he hopes she will return soon since he misses having her and Anu around. Anupama prayed to God to give upon her the fortitude necessary to juggle the responsibilities of her two households. The Shahs are overjoyed to meet their new baby. Vanraj goes and bring Kinjal back to their house.

Leela, please wait till Anupama arrives. She claims she requested Anupama to arrive earlier than expected. Hasmuk claims Anupama too has a husband and a daughter. Kavya inquires about Leela’s outstanding job that has to be completed.

When Leela told Kavya that she couldn’t accomplish what Anupama could, it made Kavya furious. Anuj tells Anupama that she should depart, but that she should return soon. Anupama assures Anuj. She continues by telling Barkha and Ankush that Anuj may occasionally forget things and asks them not to remind him of things that aren’t essential to the conversation.

Barkha inquires of Ankush about the possibility that Anuj has forgotten what they have accomplished. Ankush tells Barkha to avoid dwelling on things too much. In a dream, Anupama suggested Anuj would accompany her to the Shah home. Back in the real world, Anupama sent a prayer to God, asking him to watch after Anuj while she was away.

Kinjal can hardly wait to return to his house. Rakhi looks at Paritosh once he has arrived. As Pakhi shows the ornament of Adhik, Anupama’s mood immediately improved after witnessing the new decorations. Leela teases Anupama for being late.

Anu asked Leela not to reprimand Anupama, since Anuj was not feeling well. Hasmuk takes Anu along with her. The work was done by Anupama. Leela urges Anupama to keep Anu away from the baby.

Leela hears from Anupama that she places equal importance on both Anu and the baby that Kinjal is carrying. The three of them check out of the hospital together: Vanraj, Rakhi, and Paritosh. Rakhi has driven to Kinjal and the baby’s location. Even Dolly and Meenu are becoming thrilled about the arrival of the baby.

Anu has expressed a desire to put her hand on the baby’s cheek. Anu is cautioned to maintain a safe distance from the infant. Anupama feels agitated. Soon, Kinjal, Paritosh, Vanraj, baby Rakhi, and Rakhi herself will return home. The Shahs are excited to meet the new baby.