Anupama is the one who constantly has to grasp the problem and find a solution, therefore it’s natural for her to feel upset. Later on, Kinjal suffers from a mental breakdown and an anxiety attack. 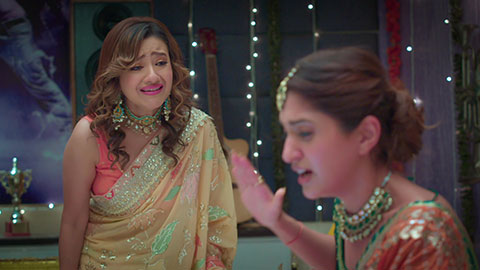 Explore the written update for the different sequences of the involving serial Anupama produced on Monday, 19th September 2022. Kinjal Goes Ballistic is the tag of the all-new episode number S1 E686.

In today’s episode, Anupama inquires of Anuj as to whether or not he has committed any errors. Anuj and Anupama. Anupama feels terrible that she embarrassed Paritosh in front of his family. Anuj expresses his solidarity with Anupama and suggests that Samar, Adhik, and Pakhi learn something from the events of the present day.

Anupama inquires of Anuj whether he and Anu had dinner together. In spite of all that’s going on, Anuj is relieved to know that Anupama still cares about him. Leela manages to crack the nuts. Leela is questioned by Hasmuk over what the problem is.

Leela asserts that she is incapable of breaking someone’s face, therefore shattering the nut. She holds Anupama responsible for the damage done to Vanraj and Partiosh’s home. Hasmuk cautions Leela not to blame Anupama since Vanraj and Paritosh were in the wrong and are getting what they deserve. Both Anupama and Anuj are now eating.

When Vanraj arrived, he pleaded with Anupama and Anuj to return home. According to him, even Barkha, Adhir, and Ankush remain silent. Anuj tells Anupama that he will take the other children home while she and Kinjal wait for him. Anupama recalled the words of the doctor and said that she would not abandon Anuj.

Anuj asks Anupama not to worry about him since GK and other members of the family are present. Anupama was certain that she would not wait. Anupama continues by saying that he would send Samar to go with Anuj since he is aware that Anupama does not want to give Anuj the duty of being the GK. Anuj and Vanraj are successful in persuading Anupama to remain.

Anupama has made the decision to speak with Anu. Anuj tells Vanraj that it is a waste of time to have a conversation with Leela. He wants Vanraj to explain to Leela that he left Anupama for Kinjal and Arya, and tells Vanraj not to put up with her taunting him about it. Assuring Anuj, Vanraj Anupama strongly encourages Anu to spend at least one night on her own.

Anu gives Anupama permission to remain behind with Kinjal and the baby. Hasmuk inquires about Anupama’s well-being. Hasmuk is asked by Anupama why it is that nice people are generally the ones that end up paying off. Anupama has a better understanding of the lady who is juggling many responsibilities thanks to Hasmuk.

He inquires of Anupama whether or not it is healthy to weep aloud. Kinjal is unable to hold together. Kavya shouts out to Anupama. Anupama begs Kavya to take care of Arya.

Kinjal inquires as to the reason for Anupama’s betrayal by Paritosh. Anupama soothes Kidnail. Dolly and Leela both ask Kavya what is wrong with her and why she is sobbing. Kavya shares with the Shahs the news that Kinjal is not feeling well.

The Shahs are concerned about Kinjal. Anupama put Kinjal to sleep. She continues by saying that a mother cannot be powerless. Anupama advises Kinjal that she must engage in combat.

Anupama asks Vanraj about Kinjal. According to Anupama, Kinjal is still asleep, and it is unknown what kind of reaction she will have once she wakes up. She converses with Arya and tells her that Kinjal needs to get ready. Both Vanraj and Kavya express their remorse for betraying Anupama and discuss the events of the past. Anuj put Anu to sleep. Anupama recollects Vanraj’s treachery and stares towards Kinjal.