Enjoy the written update for the brand-new installment of the enthralling TV series Bahut Pyar Karte Hain propagated on Wednesday, 27 July 2022 on Star Bharat. Indu, Ritesh Hit the Floor is the label of the another episode number S1 E15. 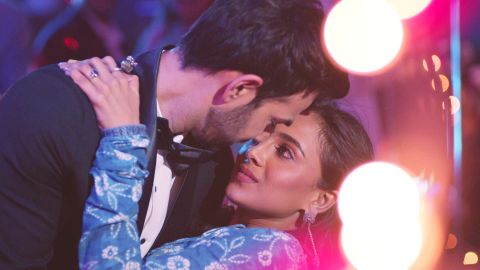 At the celebration, a dance is organised by handing out cards with numbers on them. Ritesh and Indu have matching numbers and are matched to dance on the floor.

The episode begins with Ritesh being enraged at Sameer and instructing him to close his mouth and leave. Sameer states that if you do, you are Raasleela, and if I do, I am Dheela. He declares, “I only want this girl. ” Ritesh hits him, and Sameer collapses. Sameer stands up and is about to punch Ritesh when his father, Pankaj, appears and slaps him.

He chastises him for attempting to raise his hand against his sibling. Kaamna removes Sameer from the area. Pankaj admits to Ritesh that he has no idea why he has done this. Ritesh says he has crossed all boundaries today and that if such a cheap thing happens again in my house, he will forget all relationships. Indu says, “I’ll handle it,” and instructs Pankaj not to let this item leave the room.

Ritesh inquires about Indu’s well-being. Indu answers “sure,” but adds that she is running late and will leave soon. Ritesh thanks her and expresses his pleasure at meeting her. Indu stares at him and walks away. Sameer informs Kaamna that he will be held accountable if a journalist publishes something negative about Ritesh, and that his success celebration is taking place outside.

Sameer claims he rendered us ineffective and refers to her as Maasi. She claims you took my mother’s place but were unable to become my mother or father’s wife, instead becoming Ritesh’s Chamchi. He inquires whether the truth is bitter. Kaamna’s eyes welled with tears. Vivaan shows up.

Kaamna tells him that if he does any siyappa, I won’t be able to handle your father. She goes to Pankaj and assures him that Sameer will be OK. He claims he married her to provide a nice upbringing and teach them good morals, but he actually did the reverse. He claims Sameer is a failed actor in the market, and no one wants to associate their names with each other. He claims that if I hadn’t been there, Ritesh would have thrown him out.

He requests that she cheer up Ritish and bring him out while the party is still going on. Okay, says Kaamna. Pankaj departs. Kaamna claims she married you because she loved you, Vivaan, and Sameer after Didi departed, but you didn’t appreciate my love. Dolly appears and invites her to try something.

Deep advises her not to take things too personally. Kaamna scolds her, saying that even a robber would not gaze at her. Sunita inquires of the neighbours as to why they did not invite us to a gathering. The neighbour makes excuses and then claims that they did not call because of Indu and Zoon. She claims that if I call you all, everyone will mock me.

People adopt children, according to Asha. Another neighbour also mocks them. According to the neighbour, Zoon is the illegitimate child of Mahesh and Indu. They then mock Asha. Sunita concludes by praising Asha.

She then compliments Indu for providing a nice childhood for Zoon. Asha asks her not to be upset and to accompany her. Indu tells Vivek that she cannot believe Sameer is Ritesh’s cousin and that they are diametrically opposed. Vivek apologises. Indu claims that Ritesh and his Chacha apologised on his behalf.

She invites Zoon to join her and states that they will depart. Zoon says she’ll watch the couple dance and then leave. The girl adds that all of the chits have been delivered to the girls and guys, and that whoever has the matching number should come here on stage and dance. She says the numbers 1, 2, and so on. Kaamna notices Pankaj resting his hand on the shoulder of a young girl.

Deep and Dolly both obtain the same number and go dancing. We’ll leave at 10:30 p. m. , according to Indu. Zoon begs God to intervene and stop her Moj.

Ritesh’s number 7 is up next. He claims to be number seven. The female inquires as to who is the lucky girl who was given the opportunity to dance with Ritesh. Zoon informs Indu that she has taken the chit, which contains the number 7. She invites Indu to join her in a dance with Ritesh.

Indu claims she doesn’t have time for all of this and will return the chit. She goes to inform them she can’t dance, but they let her on stage anyway. Ritesh takes a peek at Indu. Sameer declares that he will destroy Ritesh. According to Vivaan, boiling your fury will result in haemorrhage.

He instructs him to get himself to zero degrees and attack like a cheetah without notice. Sameer glares fiercely at Ritesh. Ritesh extends his hand to Indu. She extends her hand. He performs a dance with her.

The song is playing. . . Tere bin. Vivek takes a look at them.

Sameer, Kaamna, and Pankaj observe. Ritesh takes Indu’s hand in his and strikes the RK posture with her. Everyone applauds them. Rahul applauds. Wow, says Zoon of the genie Ritesh.

Kaamna informs her that she needs to keep a watch on this girl because she doesn’t seem to be right. Indu continues from there. Sameer considers destroying his image. Indu approaches Zoon and says, “We’re going home. ” They depart.

Ritesh is dancing when he notices Indu has left. Sameer approaches the waiter and inquires where he is taking the drinks. Ritesh Sir and his friends, said the waiter. Sameer moves him to the side and retrieves some medicine from the hideout, which he adds to Ritesh’s glass. He then hands the waiter money.

The waiter becomes tense. Sameer requests that he take the glass to Ritesh. Okay, says the waitress. Sameer observes.