Enjoy the written update for the different sequences of the delightful TV serial Bahut Pyar Karte Hain introduced on 31 July 2022 on Star Bharat. Ritesh Is Demoralised is the moniker of the trend-setting episode number S1 E19. 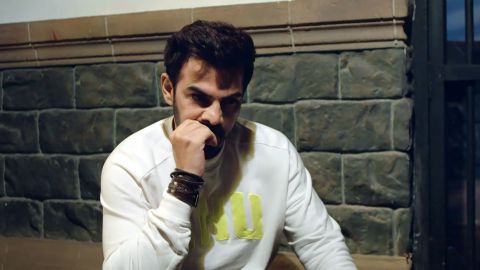 Ritesh is granted bail and released, but the public hatred he receives depresses him. He resolves to quit acting out of frustration, but Kamna consoles him.

The episode begins with Indu noticing the waiter’s ID card and informing Vivek that he is just in Mumbai. She claims he came to register his bike. Vivek claims to be someone else. He stated that he travelled to the village because his daughter was ailing. No, replies Indu, he was the same.

Indu states that because Zoon is so close to Ritesh and it is your job, she will not leave you alone. Asha promises to look after Zoon. Ritesh is humiliated and recalls his arrest. The constable orders him into the cell and asks him if he has any requests. Ritesh overhears two drunken criminals conversing.

They discuss whether he is a hero, and he appears to be a duplicate. The constable claims to be Ritesh Malhotra. The Thief claims you can say anything. Ritesh sits in the cell, thinking about the abuse and humiliation he has been through at the hands of his so-called admirers. He yells loudly.

The thieves become enraged. Sameer informs Vivaan that Ritesh is there where he is supposed to be. Vivaan inquires as to your issue with Ritesh. Sameer claims that you will not see because you are also his puppet. Vivaan says, “I don’t want to do things like you.” Sameer claims that my name and identity are dependent on me, so we left Delhi for him. Vivaan claims that following Ritesh’s father’s death, our father must assume responsibility. Sameer claims that I became his cousin. Vivaan says this is Ritesh’s residence, and we must say good morning and good night to him for the sake of peace. He claims that Ritesh has supported my club.

He claims that if the drug situation is revealed, he will not leave you. Sameer claims that since his release from prison, his following has shrunk to 50 thousand from 50 lakh. He claims that once he leaves Bollywood, people will only remember him as Sameer Malhotra. The waiter phones Sameer and informs him that I have purchased a new bike. He says he’s thinking about going to the village since people could ask.

Sameer inquires, “Didn’t you go until now? ” The waiter requests an additional $75,000 to complete the flight. Sameer refuses to give him money and hangs up. I hope this waiter doesn’t open his mouth in front of everyone, adds Vivaan. Sameer looks for the camera that the waiter used to film everything and finds it missing.

He asks, “Who took it? ” Vivek and Indu arrive at the waiter’s home. The waiter unlocks the door. Vivek claims you mentioned going to the village. The waiter says, “I was leaving; I have a train in 20 minutes.

Without packing the clothes, Vivek says He claims to have been packing. Vivek inquires about the bike. He claims he did not have a bike. Indu slaps him and tells him, “You got it registered today. ” Vivek requests that Indu record and hand over his phone.

Indu shuts the door. Vivek humiliates the waitress. The following morning, the reporter reports that Ritesh was locked up with the thieves. Another reporter claims that his favourite cuisine came from home, but it was not permitted. According to the reporter, he slept on the floor and used to sleep on a velvet bedsheet.

According to the other reporter, he only had tea and a croissant. They only found out afterwards that he had been granted bail. Ritesh returns home. Kaamna embraces him. Sameer becomes agitated.

Dolly does the aarti. Ritesh advises Chachi not to do it. Pankaj claims that this should not have happened and that he will stop the drama shortly. He makes him a pledge. Ritesh enters his room and examines his mother’s wheelchair.

He enters his room and closes the door. He works out in his room, remembering the humiliation. Kaamna arrives and informs you that you were six years old when your parents were killed in an accident. You were crying in a corner when I arrived, and all you did was hold me. Ritesh embraces her.

According to Kaamna, everything will be alright. Ritesh claims that nothing will be fine since we live in a hypocritical culture where everyone wears a mask that only comes out when they are in danger. He claims that someone threw a slipper on me and that the police, who provided me with security, locked me up with the criminals. He claims drugs were found in my blood, despite the fact that I don’t use them and don’t make films about drug users for fear of inspiring others. If I don’t feel pain, he says.

He declares that he does not want to be a part of this world where people admire you one moment and disgrace you the next. He claims that no one deserves this insult, that Maa is in this state because of me, and that Papa is not here because of me. He claims I’ll lose everything. Kaamna assures you that everything will be alright and that Pankaj ji has scheduled a press conference for you today. She claims that others are unaware of our side of the story and that if you remain silent, they would conclude that you are weak and committed this crime.

People believe that because we have so much dirt in our lives, we will not be affected if they splash dirt on us. She believes we must convince them that we are only like them and experience their suffering. She claims you are this country’s heart, and when it beats, everyone will know. Ritesh claims I’ve become frail. Kaamna says she’ll bring the person in charge and hugs him.

Ritesh sobs. She instructs him to prepare for the press conference, believing that the truth would be drawn out. Vivek informs Indu that no one in the Malhotra household is answering the phone. Indu expresses sympathy for Ritesh. Vivek says we need to tell Ritesh and give him Rajesh’s recording.

Zoon shows up. Indu requests that she relax and refrain from playing. Zoon inquires if you informed everyone that Ritesh is a good boy. Indu asks, “How can I tell? ” Asha invites them to his home.

Anjali claims that a press conference is being held at his home today, and that only members of the media are permitted. Vivek has an idea and assures Indu that Kutton ki Duniya ki reporter will bring the truth to everyone’s attention. Indu has an epiphany and informs Zoon that everyone will know that Ritesh is innocent now.