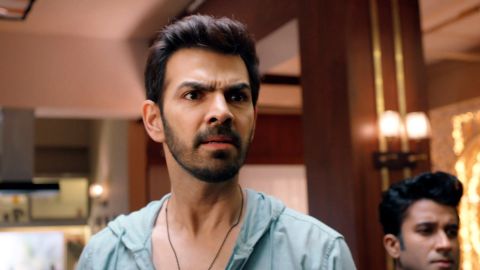 The journalists encounter Ritesh’s anger during a press conference. When there is a commotion at Ritesh’s house, Indu arrives with proof.

The episode begins with Pankaj explaining that a lot has happened in our family in the last few days, and we need to get things back on track. The court verdict will come later, but for now, we need to stay with Ritesh as a family, which is why we need to be careful during the press conference and say whatever the lawyer tells us to say. He claims that the press will try to force us to speak, but that we must be cautious because one misstep might damage Ritesh’s career. Kaamna declares that all of my eyes will be on everyone and that if anyone makes a mistake, no one will be worse than me. Deep asks whether it’s okay if I skip the press conference.

According to Kaamna, we will stand by Ritesh. Deep claims that his work has suffered as a result of his absence from the job site for three days. I said, according to Kaamna. She then instructs Dolly to prepare breakfast for the press and instructs her not to consume it, but rather to serve it. She approaches Ritesh and tells him that this is a momentous day for him, and she asks if he is ready to tell the world the truth.

Ritesh tells me what to say when I don’t know where the narcotics in my blood originated from. Sameer claims it was a success party, which you would have accepted. Ritesh claims that I do not use drugs. Sameer says you’re free to tell your family. Ritesh claims that the truth is that I do not use drugs and that if I can’t convince my family, how can I convince others?

Kaamna claims that when he said he didn’t take it, he didn’t take it. Sameer believes that nothing can save Ritesh. He tells Kaamna that she is free to disregard his report, but not him. He leaves after promising to lie for her. A servant is tasked by Kaamna with organising the press conference hall.

Sunita receives a phone call and inquires about Indu with Anjali. Anjali claims to have gone out to work. Sunita approaches Rajendra and tells him that dot com called and stated that a family liked Indu’s profile and will come to visit Zoon because the groom is leaving for Dubai tomorrow. She claims she called them late at night. Rajendra wonders if it is necessary to do it now because Zoon is healing.

Sunita claims that 5 years have passed due to Zoon. She claims she is not looking for a marriage anytime soon. Okay, Rajendra, talk to Indu. Deep requests that Servant serve water to the media. She requests that they contact her if they have any questions.

Rahul enters and motions for them to take a seat. The media wonders why this press conference is being called. Kaamna inquires as to who summoned them. Pankaj claims that those who were opposed to Ritesh will now support him. Ritesh shows up.

Kaamna claims that you will never stop hearing me. Ritesh claims that I am doing this for you. He takes a seat on the sofa. Rahul said Ritesh would give his statement regarding the drug case involvement and that no additional questions would be asked. Ritesh thanks the media for arriving and claims that many of you wrote the stories and stated that we were using drugs at the party.

He claims that I want to make it obvious that no drugs were consumed at my party and that this is being done to tarnish my reputation and that all of the accusations levelled against me are false. Indu warns Vivek that they will be late and instructs him to drive quickly rather than slowly. He claims that this is a CNG automobile issue. Sunita phones Indu and requests to come home. She says someone is coming to see you, that she is your mother, and that she wants you to get married.

She invites her to come meet the guy. Indu says, “OK, I’ll come. ” She instructs Vivek to drive quickly. Ritesh claims that this is a difficult moment for our family and that we are also hurt. He requests that they respect their privacy and leave them alone for a while.

Ritesh wonders if there was any unfavourable news about me and why you didn’t think twice before sharing the news. According to the reporter, the report was validated by the narcotics division. Another reporter claims that only bad people use drugs. The reporter asks if you have any idea what the younger generation will do if they see you and how you will look at them. Ritesh is enraged yet remains composed.

When the politician returns, you have betrayed the people. Rahul claims there was a misunderstanding. The politician motions for him to step aside and tells Ritesh that he will blacken his face and let the video go viral on social media. Vivek receives a call and indicates that he will attend. He informs Indu that he must attend Sangeet math.

He asks whether she may go to Ritesh’s residence alone and hands her a pen drive. Indu starts walking and looking for an auto. The politician claims you will incite the populace, and I will remain silent. Ritesh asks who he is and how he got into my residence before calling security. Sameer beams.

The politician calls you a cheap actor and asks, “Who am I? ” He says he’ll ban your flicks and you won’t be able to leave the house because you’ll be shaken. Ritesh, according to Kaamna, is innocent and has done nothing wrong. The politician requests proof. Indu is walking down the street.

Ritesh is called by Kaamna. Indu is still walking. The politician stands up and says, “You raised your hand on me; now see what I’m going to do with you. ” The politician’s goons have Kaamna and Dolly in their grip. Pankaj wonders what this madness is.

The politician says that industry people consider themselves intelligent and that others are ignorant. He dips his hand into the ink. “What are you doing, Kaamna and Dolly inquire? The politician requests that he remain silent. Ritesh orders the goon to leave the reporter girl alone and threatens to make her go away naked.

When Indu arrives and shouts for them to stop, the politician is about to blacken his face. . . and claims that I can prove Ritesh’s innocence. She requests that the goon leave the reporter girl alone.

She offers Ritesh the pendrive and asks if she may speak to him alone. The politician declares, “I’m leaving your respect for 5 minutes, no longer. ” Ritesh enters the house. Indu follows him. Kaamna leaves. Sameer becomes concerned.