Enjoy the written update for the latest sequence of the wonderful TV series Bahut Pyar Karte Hain provided on Wednesday, 03 August 2022 on Star Bharat. Indu in Trouble is the headline of the all-new episode number S1 E21. 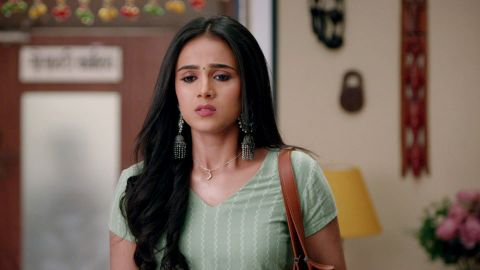 Everyone is surprised to learn the name behind the terrible plan when Indu reveals the proof. Later, Indu’s mother lashes out at her for breaking her pledge.

The episode begins with Ritesh entering his room. Indu approaches him from behind and hands him a pendrive. He observes Vivek and Indu questioning waiter Rajesh. Sunita is waiting for Indu to return home. Anjali arrives and requests that she make tea.

Sunita promises you tea when your friends arrive. She instructs Anjali not to let Zoon go outside and to do her job well. She phones Indu and wonders why her phone won’t connect. The doorbell rings. Sunita wonders if Indu or the groom’s family arrived.

Rajendra unlocks the door and discovers the groom’s relatives on the other side. He welcomes them. Sunita becomes concerned and wonders where Indu is. Ritesh appears with Kaamna and Indu and requests that Rahul play the video. Everyone, he claims, wants to know the truth.

Rahul shows the footage in which Vivek requests that the waiter tell the truth. Indu inquires whether his family will be relieved if he is imprisoned. She assures him that if he reveals the truth, the police will not be harsh on him. Rajesh claims that someone gave him money and urged him to mix narcotics into his drink, and that I taped the video. Indu inquires as to who had supplied the money and assures her that if she tells the truth, the police will not be hard on her.

Everyone is still watching the video. Sunita requests sweets from the groom and his family. The lady claims that we had had enough, and that if your daughter was occupied, you would have informed us. Sunita requests that Asha contact Indu. Everyone looks at the video.

Indu receives Asha’s message and proceeds from there. Sameer inquires after Vivaan as to what it is. Sameer claims that this is my Plan B; I paid him twice as much to take her name. Shivangi claims I did nothing wrong, Ritesh, and that this man is trapping me. Ritesh becomes enraged.

Kaamna tells him not to do anything and informs him that Pankaj ji has called the police. Pankaj requests that everyone leave them alone and informs them that the police will arrive. Ritesh demands the politician to stop and says, “I told you I’d beat you naked. ” He hits him and shreds his clothes. He claims that I never misbehave with anyone or that I never leave people who misbehave with my family.

The reporter wonders why Shivangi did this to Ritesh Malhotra. When Indu returns home, he finds Sunita upset. She apologises to Moj, saying she was at Ritesh’s place. Sunita chastises her and wonders why she agreed if she wasn’t going to arrive on time. She questions why you wasted everyone’s time.

Indu apologises. Sunita claims it is not a mistake for you and that I am the monster in your life who is forcing you to marry. She claims you have a high possibility of humiliating me. Indu inquires, “What are you saying? ” Sunita asks whether I’m crazy because I’m your mother and want the best for you.

She inquires as to why you did not attend. Indu claims I chose Zoon. . . Sunita states, “I’m tired of Zoon,” and adds, “I’m your Devika and Yashoda.

Select me before her, give me priority over her. ” She walks away. Indu sobs and declares, “Listen to me. ” Asha claims that soon as Moj calms down, she will be alright. Indu claims she tried to arrive on time but was delayed by the conference.

Anjali assures Indu that she did an excellent job, and that Ritesh has been shown innocent in the media. Indu inquires about Zoon. Anjali claims to be sleeping. What are you thinking, Asha? Indu claims she needs to speak with Zoon.

Later, she feeds Zoon and assures him that everyone believes Ritesh is innocent. Zoon praises my Moj and claps. Indu declares that her phuggi is the best and wishes for her to always be the best. She advises her to concentrate on her schoolwork, health, games, and eating well. Zoon claims that after meeting Papa, she will be superfast, as Genie Ritesh promised her.

According to Indu, Ritesh is an actor who works in films and does not have time. She explains that because we all love you so deeply, you also require Papa. She advises you to divert your attention elsewhere till Papa arrives. She says you’ll concentrate on your education and your health, and you won’t talk about Ritesh or watch his movies. Zoon wonders why.

According to Indu, I will not allow you to watch a movie. If Anjali Maasi, Bob Ji, and others talk about Ritesh, Zoon says Indu promises to make them understand, and if they bring up the subject with you, you will refuse to discuss it. She makes her pledge and declares her love for him. She gives her cheeks a kiss. Zoon wipes her brow.

Indu tells her that you’re furious with her and tickles her to make her giggle. She hugs her and thinks, “I don’t want your heart to break because Ritesh can’t help you. ” Rahul arrives and informs them that Shivangi has been arrested by the police. Ritesh exclaims, “I can’t believe she can do something like that. ” Rahul claims that’s why he doesn’t believe the girls and accuses them of betrayal.

Ritesh claims that if one girl gets trapped, the other girl saves him, and we’re drinking because of her. Kaamna approaches and inquires if she was the reporter that conducted his interview at the party. Ritesh confirms, but she was not a reporter since she was afraid. Rahul inquires as to why you were entertaining her at the time. Ritesh mentions something about her and urges him to find out more about her.

He says, “In fact, call her here, and I want to personally thank her. ” He asks Kaamna what she says. Yes, says Kaamna. Ritesh informs Rahul that they will give her a gift. Kaamna feels the girl is clever for attending the party without revealing herself to be the journalist. She intends to meet with her.