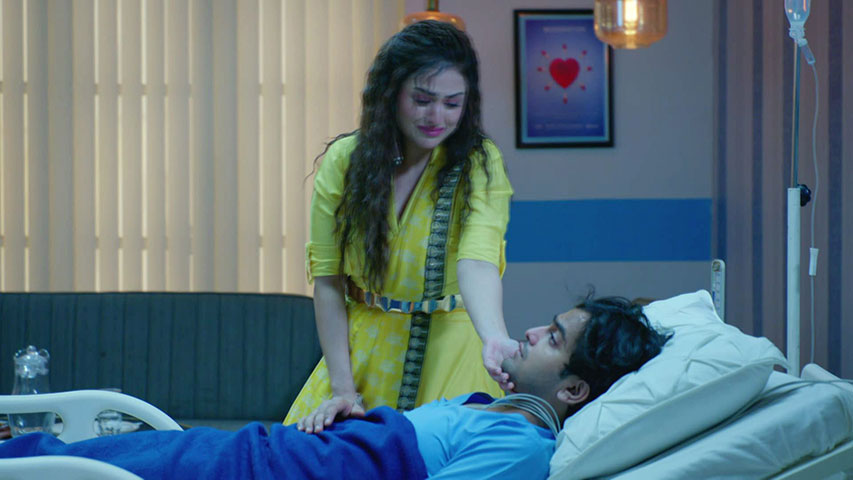 The first thing in this episode is Manini telling Banni that for Yuvan to recover from this shock, he needs his mother’s love and compassion. Banni has said she wouldn’t be allowed anywhere near Yuvan since she is to blame for Yuvan’s condition. According to Manini, you’re a stubborn person, but what if you can’t bring Yuvan back to his senses? Banni goes to Yuvan’s room.

Yuvan doesn’t answer when she reminds him of his pledge and begs him to respond on her behalf, but he doesn’t respond either. Banni asks him to respond to his dance. She dances for him while thinking back on all the times they’ve had together since the beginning. Banni’s efforts to get a response from Yuvan are met with silence.

There, Devraj and Manini may be found. Manini smirks, seeing Banni. She goes to Yuvan and performs the Lohri Vandana that was previously performed for him. She asks him to get up for his mother, who is sleeping.

To demonstrate his response, Yuvan moves his finger. A grin appears on Manini’s face as she informs Banni that Yuvan is reacting. She requests that Banni relay the information to Yuvan that Manini is Yuvan’s Vandana mother. Devraj asks Banni to do it.

Banni is under the impression that she is acting to protect Yuvan. She explains to Yuvan that Manini is his Vandana mother. The latter has ascended to heaven to care for him. Banni requests that he reply.

Banni demands that the Doctor checks on Yuvan and then tells him that Yuvan has answered her question. The physician examines Yuvan and reports that the likelihood of Yuvan making a full recovery is high, given that he has reacted to the treatment thus far. Banni prays to Bappa. Devraj goes to Banni in order to apologize to her for the fact that he caused her to lie.

He explains that he acted in this manner for Yuvan’s benefit. Banni claims that I was aware of it, which is why I gave my consent since protecting Yuvan’s life is much more essential than anything else. She explains that she is praying to God to provide Yuvan with fortitude. He will need to confront this brutal reality in the future because everything will end if he begins living a lie.

She then proceeds to the chamber, where she discovers that their wedding movie is being played backward. Manini extends a warm welcome to her and informs Banni that she will take her name from Yuvan Singh Rathod’s Banni. She begins counting down for her and issues a challenge to her, asking her to evict her from her home. Banni becomes enraged.