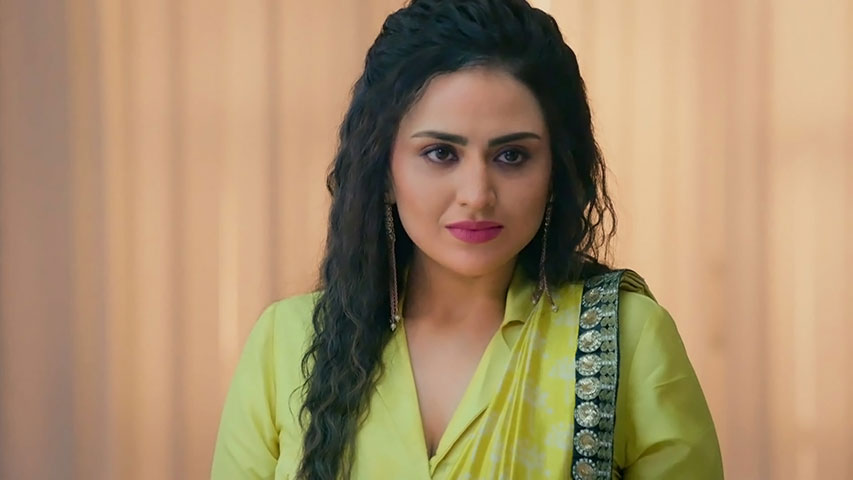 Manini tells Banni, “I saved Yuvan for property, and I don’t want you to occupy 50% of the land after Yuvan’s death. ” She claims I want all of his property, which is why I used your love and affection approach to heal him, and that I will now force Yuvan to kick you out, after which all property will be mine. Manini believes she will force Devraj to bear her pain. Banni is taken aback.

The doctor arrives. He requests that one of them depart. Manini makes Banni leave. Banni exits the room, feeling powerless.

Manini instructs Banni to prepare food and informs her she will feed him. Banni walks inside the kitchen, recalling Manini’s admonition. Viraj arrives and asks her to find a new wealthy customer. Banni mocks him with a rolling pin for trusting Manini.

Yuvan questions Manini about Banni’s claim that she is not his mother. Banni is aware of it. Manini claims that since your mother has returned from the skies, but Banni’s mother has not, she is envious of you and may want your mother to return to the heavens. Yuvan begs her not to leave.

Banni exits the room, leaving food behind, while Manini grasps Banni’s shoulder. Yuvan approaches her and inquires if she is jealous, as her mother suggested. Yuvan hugs her and asks her to conceive his mom as her mom. Banni signs him to smile.

She believes Yuvan showed decent people are immune to evil. Manini is dissatisfied, and Banni conceives tackling Manini. Yuvan and Banni would bring Bappa home the following day. Yuvan informs Manini that they have purchased a house for Bappa.

Banni begs Bappa to give Yuvan strength. She takes Manini with her to decorate Bappa. She assures Manini that Bappa will reveal the truth. Everyone dances happily.

Charmi wants to enter the dance floor, but Viraj prevents her from doing so. Charmi makes fun of Viraj by comparing him to Banni. Banni tells Manini that Yuvan’s heart is full of love and that he is mine in every way. Manini observes.

Banni tells Manini, “Let’s see who wins this war: a scheming stepmother or a devoted wife. ” Banni promises to make Yuvan give his enemies lessons and teach him the difference between good and evil. Manini becomes enraged. Yuvan arrives with a red rose.

Banni grabs Aarthi and tells Yuvan not to be afraid. Vishnu invites their Ganesh Ji to Banni, Yuvan, and everyone else. Yuvan says everyone will attend and invites Manini to accompany her. Manini claims she has a job and won’t be able to go, but Viraj will accompany her.

Viraj is taken aback when he hears this. Viraj agrees to follow up. Yuvan, Banni, and Myra pay their respects to Ganesh Ji in Basti Wale. Vishnu tells Banni that everything is prepared for her to make laddoo.

Vishnu means Yuvan that Laddoo would be prepared in this Basti Banni, and only then will they present it to Ganesh Ji. Banni informs Vishnu that Yuvan will also assist with the decorating and asks Vishnu to notify Yuvan if there is anything else. Myra also offers to help. Banni tells Devraj that she had an idea to get Yuvan out of Manini’s clutches and asks whether Yuvan has any dreams that he wants to pursue totally.

Banni says Yuvan was now only living to love them. Banni says she thought about it a lot and tells Devraj that there is one thing Yuvan adores, and that is Sangeet. Devraj compliments Banni.