Read the written update for the most recent installment of the pleasurable TV show Bohot Pyaar Karte Hai brought on Friday, 26 August 2022 on Star Bharat. Indu Worries about Zoon is the pseudonym of the newly published episode number S1 E41. 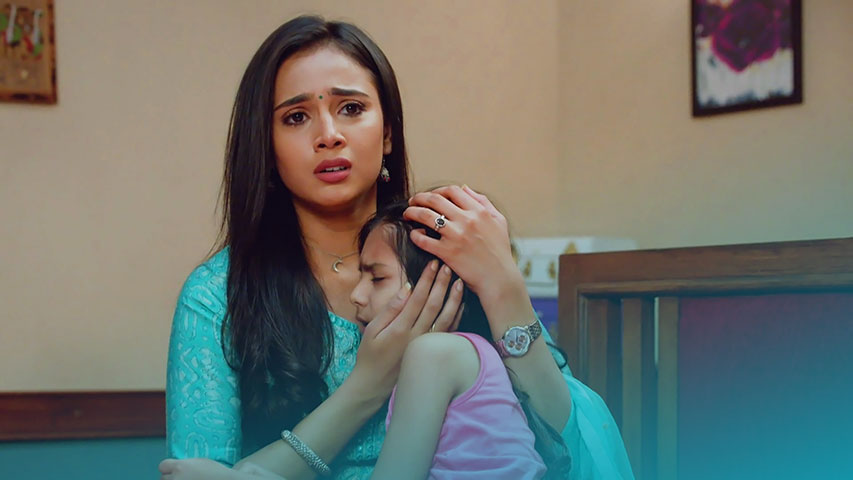 Zoon is worried after overhearing Pankaj and Kamna’s chat when the latter threatens her. Later, Indu becomes concerned about Zoon’s health.

Ritesh begins the episode by sitting near his mother in the house. Shakuntala is presently stable, according to the doctor. Ritesh thanks him for his assistance. The doctor walks out of the room.

Ritesh’s actions astound everyone. They are all silent. Kaamna afterwards thinks to herself, “I hope Zoon didn’t say anything to anyone. ” She then notices Indu stepping out of an auto rickshaw.

She believes Zoon may have said everything to Indu and that Indu is coming to confess the truth to Ritesh, so she prevents Indu from meeting Ritesh and exits the house. In the middle, Kaamna and Indu cross paths. Kaamna inquires as to her purpose for being here. Indu asks Kaamna what she told her daughter that caused her daughter’s health to deteriorate.

Kaamna is relieved since she believes Zoon did not tell Indu anything, so she begins criticizing Indu. Indu advises Kaamna not to push herself too far. She then requests that Kaamna tell her what she did to Zoon because the doctor recommended that learning the truth would help them heal Zoon. Kaamna says she won’t tell her anything and tells her to do anything she wants.

Indu says she will not spare her if anything happens to her daughter, and she will not leave the area until she knows the truth. A mother will go to any length for her child. Kaamna threatens Indu with legal action for breaching their privacy and asks her to leave, but she keeps mute. When her attempts to throw Indu out fail, Kaamna summons security to throw her out.

Ritesh hears Kaamna’s voice and wonders who she wanted to throw at this moment, so he goes outside to see who is there. Indu begs Kaamna to assist her in finding her daughter. Kaamna declines, mocking her for threatening her earlier. Security arrives at the same time Ritesh leaves the house.

Kaamna motions for them to depart, and they do so. Ritesh is perplexed when he sees Indu and wonders what she is doing here. Kaamna pretends and tells Ritesh that she warned Indu not to disturb them because Shakuntala has been released from the hospital, but she doesn’t listen. Ritesh tells Indu that he doesn’t want to talk to her and goes inside, but stops when Indu tells him that her daughter came here to give him prasad and she doesn’t know what occurred after that, and her health is deteriorating, so she wants to know what happened.

Ritesh questions Kaamna about why she didn’t tell him about Zoon’s visit. Kaamna claims that she forgot about it since she was worried about Shakuntala. Ritesh informs her that he should be aware of who comes to meet him here. He then asks Indu how Zoon is doing.

Zoon’s condition has not improved, according to Indu. She also says Zoon keeps saying she won’t tell anyone, so she wants to know what occurred. Ritesh stares at Kaamna, who asks Indu how she can blame her for Zoon’s health state when they did nothing to her. Ritesh chooses to accompany Indu, which disturbs Kaamna Kaamna since Ritesh may discover the truth.

So she tries to stop them by reminding him about Shakuntala’s condition, but Ritesh tells her that Rahul and the caretaker are here to care for Shakuntala and departs with Indu. Anjali tells Sunita in Raina’s house that she is unable to contact Indu and has no idea what is going on in Ritesh’s house. Indu returns home and asks Sunita how Zoon is doing. Sunita reports that the temperature has dropped.

Ritesh also shows up. He sits next to Zoon, with Indu on the other side. He inquires about Zoon’s health with the family members. They all notice Zoon about to vomit, so Indu begs Anjali to get a bowl, but before she can, Zoon vomits, so Indu and Ritesh take it in their hands to keep the bed from rotting.

They are locked in an eye lock. On the other hand, Sameer tells Vivaan that he let Kaamna suffer since she was a Ritesh puppet for a long time. He then claims that there is a strong bond between Kadambari and Indu. If he discovers the truth, no one can stop him from achieving great heights in his job, and he becomes motivated to discover the truth.

Raina’s Zoon declares once more that she will not inform anyone about anything. Indu begs her to tell her what occurred. Zoon contacts Genie Ritesh and informs him that his mother has fallen down the stairs. Ritesh wonders how she knows this and looks around, but everyone is as perplexed as he is.

Zoon then informs Pankaj that she will not reveal this information to anyone. Ritesh is taken aback. Vivek wonders why it bothers Zoon so much. Indu claims that when she entered the room, Kaamna was talking to Zoon and she became ill.

She also asks if this is how she treats and threatens children, and she sobs. Ritesh urges the Rainas to call him if they need his assistance and departs. Pankaj in Malhotra’s informs Kaamna that Ritesh will not do anything to him and urges her to look after herself. Ritesh approaches Pankaj, takes his collar, and inquires as to how his mother fell down the steps.

Everyone rushes downstairs to stop Ritesh from storming Pankaj. Ritesh mocks them for living under his roof and lying to him in this manner. Shakuntala’s accident leaves Pankaj admitting that he was the cause. Ritesh dismisses him as a coward.

He then confronts Kaamna for threatening a five-year-old child, pointing out that she may not have given birth to a child, but she does have instincts about how to behave. Everyone is taken aback by Ritesh’s outburst. Ritesh then states that this is not his family and that they have all changed and that he no longer knows how to believe them and goes inside. Deep and Dolly trailed him.

Precap: In order to punish Indu and Zoon for making Ritesh turn against them, Kaamna enlists the aid of Pankaj Sameer and Vivaan. Each person holds the other’s hands. On the other side, Satish calls Indu and asks her to meet him somewhere to return his favour. When Indu turns around, she is startled to see someone. Kaamna tells Ritesh that she doesn’t want that life without him and then locks herself in her room. Ritesh asks Kaamna to unlock the door to her room. He opens the door after that and seems astonished as he enters.