Vivek and Indu put on masks and attend Ritesh’s party while pretending to be clowns so that they may meet with Zoon. The woman who is really Zoon’s mother pays a visit to Indu at her home and finds out information about the latter. 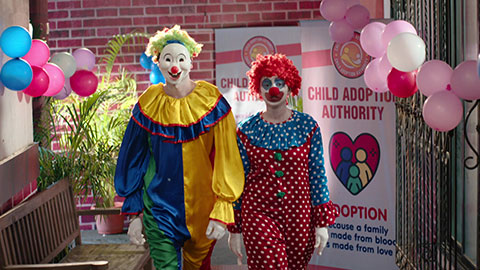 Ritesh begins out the episode by asking Zoon where her favourite puzzle is so that the two of them may work on it together, and he notices that she is upset. He inquires as to the rationale for it from her. Ritesh hears from Zoon that he wants to inquire about anything with Indu. Ritesh is observing her right now.

Vivaan inquires of Kaamna of the success of her strategy when they are travelling in the automobile. The response that Kaamna gives is that she is unsure but that she will contact the police. Kaamna receives word from Bhavna that Indu attempted to meet with Zoon but was prevented from doing so by Ritesh. Kaamna’s reaction is one of surprise, and she then tells Vivaan that she does not want Zoon to reveal to Ritesh what she has revealed to her.

She urges Vivaan to go to the CAA centre as soon as possible. Ritesh inquires of Zoon of the question that she intends to put to Indu. The moment Zoon is ready to say anything, Kaamna enters the room and starts calling Ritesh’s name. Ritesh inquires about her whereabouts and why she is at this location.

When Kaamna entered the room, she prompted Zoon to want milk and supper, and she also informed her that Bhavna would be there to accompany her to the dining room. Zoon says that she does not want to have any milk at this time. Kaamna assures Zoon that drinking milk would help her become more powerful, despite the fact that Ritesh also consume milk. Ritesh also mentions to Zoon that he has milk throughout their conversation.

Zoon complies with Bhavna’s request to drink milk and follows her. Ritesh hears from Kaamna that she saw Zoon earlier and brought food and other items for her. Kaamna explains this to Ritesh. Ritesh feels grateful to her for accomplishing all that she has.

He then reveals his concerns about Zoon, who is begging for Indu, and how he discovered Indu’s real face when she told the court that she kept Zoon with her against her own choice. Because of this, he has decided that he would not allow Indu to see Zoon under any circumstances. Kaamna takes action and requests that she speed up the procedure for adopting a child. Ritesh assures her that he is making an effort.

After that, Kaamna suggests throwing a children’s party as a way to cheer Zoon up and improve his spirits. Because Ritesh thinks it’s a good idea, he and Kaamna go to ask Gayatri for her blessing on it. Gayatri has some reluctance but ultimately agrees to Ritesh’s proposal. Ritesh expresses his gratitude to her and assures her that he will see to all of the preparations himself.

Atul reveals to Raina that their first aim is to secure Indu’s release, and as this has already been accomplished, they need to take action in order to bring Zoon along with them in a lawful manner. Indu explains to Atul that the process would take some time but that she is desperate to see her daughter at least once and begs him to take action. Atul makes the decision to dial the number for the CAA centre. He describes Indu’s condition to Gayatri and requests her consent to introduce Indu and Zoon to one another.

Bhavna walks in and informs Gayatri that Ritesh was cleaning out the living room in order to prepare for a party that he was hosting. This causes Gayatri to lose her train of thought. Ritesh is told by Gayatri that she should let him do anything he wants. After that, she informs Atul that she is unable to assist Indu in meeting Zoon, and then she hangs up the phone.

Anjali tells it’s unfair. Indu urges Anjali to tell them to do whatever they want to do because she is going to see Zoon today no matter what the cost and no one can stop her. Some time later, Vivek and Indu are riding in the automobile together. During the phone conversation, Vivek discusses the party plans with his subordinate, confirming everything with him.

After that, he tells Indu that he has the best plan possible, and that there is no one who can prevent her from seeing Zoon today. Indu explains to Vivek that the commitment she made to Sunita is the reason she did not adopt Zoon in a legal capacity and that this is what brought her and Zoon to this predicament. Throughout this whole time, she has been concerned about how Zoon would respond upon learning that she is not Zoon’s biological mother; yet, she has decided that she has to tell Zoon the truth before anyone else can. Vivek pushes her to do the same, adding that after that, they would have a stronger connection.

When Kadambari arrived to Indu’s home, she pretended to be Indu’s college mate Juhi and introduced herself to Indu. The door is opened for her by Sunita. On the other hand, Rajender tells Asha about his chance encounter with Kadambari after all these years at a restaurant, and he discusses his concerns with her over Indu and Zoon. The revelation that Rajender made leaves Asha in a state of amazement.

Ritesh and Rahul applaud the work put in by the event manager for this celebration as well as his initiative to bring in artists who act as clowns. This praising takes place in the CAA centre. By disguising themselves as clowns, Indu and Vivaan were able to make it all the way to the centre. Ritesh instructs them to keep all of the children entertained, but he places a higher priority on Zoon’s happiness than the others’ since he is throwing this party just for her, and he so requests that they make her happy.

Ritesh has Indu and Vivek sign something, and then they both depart the location. Kadambari notices the picture frame that Indu and Zoon have together. She remembers her interactions with Zoon, who posted about Ritesh and Zoon at the same time. She inquires as to whether or not Zoon is Indu’s daughter, to which Sunita responds in the negative and describes how Indu removed Zoon from the bus where a woman had given birth to her and then abandoned her.

Since that time, Indu has been raising Zoon as if she were her own daughter. In addition, she reveals that Zoon is now residing at the CAA facility since Indu did not adopt her in a legal capacity. Kadambari is stunned. When Rajender returns home, though, he is oblivious of Kadambari’s presence.

Sunita scolds him and brings him to see Kadambari. Both of them discover that there is nobody there. Sunita is perplexed as to the reason for her abrupt departure. Ritesh is the one who is responsible for bringing Zoon to the celebration.

Zoon becomes thrilled viewing the arrangements. After that, Ritesh informs her that the clowns are also there, which makes Zoon more happier. Indu and Vivek go there, and while they’re there, they dance with the children. After Indu’s emotional reaction to seeing Zoon, she makes the decision to go talk to her, but Vivek Vivek prevents her from doing so.

Ritesh places Zoon in close proximity to the two clowns that are Vivek and Indu. Indu has certain feelings, but she still dances with Zoon and Ritesh. Ritesh and Zoon both have a cheerful grin.