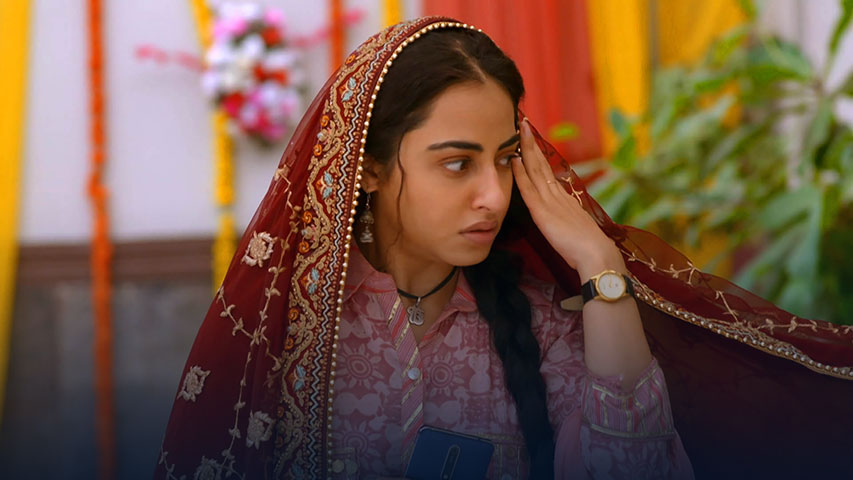 Ginni sees Rajvanth while working to save Goldie and begs him to call off Aditya and Sam’s wedding. Rajvanth declines to assist, so Ginni devises a scheme.

Gurleen informs Sam. You must have dreams about your wedding, and we will prepare you for them. Where is Supreet’s lehenga, she inquires? It’s here, Sharja says as she brings it.

Supreet observes. Sharja tells Sam to get ready to become their daughter-in-law and explains that this is Adi’s mother’s lehenga; she is not present, but I am here for you. Sam believes that I must wear an outdated lehenga even if I am marrying a wealthy man. Sam is approached by Amber, who says, “Let me know if you need anything else.” I’m letting you join my family because Supreet likes you. Sam expresses gratitude to him. Amber departs as Supreet arrives. Supreet says, “When I look at you, I think of my marriage.”

Sharja appears and jeers, “Will Sam do what Supreet did? ” Supreet shoots her a glare. Ginni enters the home while Darji is outside and requests that the wedding be called off. Why, wonders Darji, Ginni claims that Sam is actually my sister-in-law, going by the name Simran, and she is married to Goldie. Adi will commit suicide if she marries him. Darji is perplexed. Ginni reveals everything to him. Following her departure, Sharja informs Sam that Supreet seized control of everything when she got married.

Supreet is told by Sam to stop worrying about other people because we are close. Supreet makes her preparations before departing. Sam advises me to restrain Sharja’s verbal outbursts. Nobody should be in any doubt because if they are, it will become clear that this child is not Adi’s.

Ginni is told by Darji that it is too late to stop this wedding at this point. Ginni begs him to call off the wedding because her brother will die. Adi is aware of all of this, Darji queries. Ginni agrees, but he is still planning to wed her.

Darji asserts that because he is an adult, Sam’s marriage must have merit. I can’t stop this marriage because I trust Adi. According to Ginni, my family is important to me, and if anything happens to him, I won’t be able to go. Please provide a hand.

Darji apologizes and adds, “I’m sorry I can’t be of more assistance. Ginni then bemoans her departure. Darji begs God to assist her. Ginni is returning home and thinking about how she was unable to prevent the wedding.

On the other hand, Adi is by himself. They are both depressed and anxious. Bheji thi dua is played. Ginni collapses and sobs.

When Gulabo calls, she replies that Goldie has locked himself in the room and urgent help is needed. When Ginni returns home, she discovers Goldie’s body. Ginni is horrified to find that her family is crying. It ends up being her dream.

When Ginni answers Dimpy’s call, she asks whether Ginni has spoken to Darji about Goldie’s lack of conversation. Ginni hangs up the phone. As the ceremony begins, Adi arrives at the mandap. In her room is Sam.

Her chunri mishaps and lands on Ginni’s head from the window. But Ginni has an insight. Adi waits for Sam while seated at the mandap. There are all the family members. The bride must be called, the priest requests. Sam is brought there by Sharja and Supreet, while Ginni is hiding beneath the chunri. It’s unknown.