Let’s enjoy the written update for the newest installment of the magnetic TV drama Channa Mereya pronounced on Friday, 02 September 2022 on Star Bharat. Aditya Sides with Ginni is the pseudonym of the most recently published episode number S1 E49. 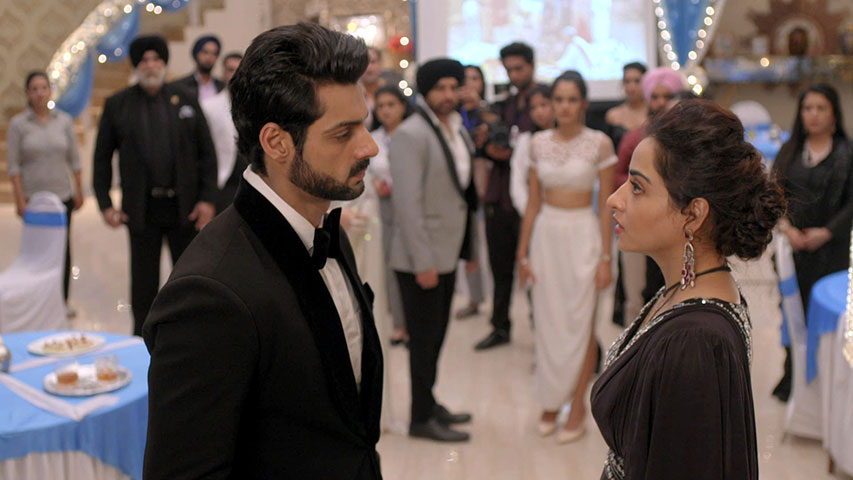 Ginni breaks the news to Aditya that the evidence she had obtained against Sam was insufficient. Aditya takes Ginni’s side and exposes Sam while Sam is busy denying the charges that Ginni has made against her.

Supreet searches for Ginni at the beginning of the episode, and when he discovers that the door to her room is open, he is astonished and wonders how it happened. Ginni ponders how she would descend from this height within the room. She then grabs the curtains and begins to tie them together. Supreet makes the choice to open the door.

Ginni sets up a plan for her to leave the room. Sam becomes concerned when she notices Supreet standing outside the space where Ginni was imprisoned. In the meantime, Ginni exits the room by using the curtains. Supreet is informed by Sam that she is looking for her.

Supreet inquires as to why before stating that she is looking for Ginni if she was seen anywhere. Sam informs Ginni that this is how her family has always been. They accuse others, but when it comes to proving the truthfulness of their remarks, they fail. She continues by stating that Ginni must have remained unnoticed since Aditya would soon make a significant statement about his life partner.

Supreet says nothing. They can go downstairs, Sam says. Supreet concurs. They both depart from the location.

Meanwhile, Ginni arrives at the party location. She worries as she scans everyone. The light disappears. The wedding video of Aditya and Ginni begins to play on the screen.

Everyone wants to know who Aditya’s life partner is, and the voiceover promises that they will find out soon. At the conclusion of the video, Sam muses to herself. Ginni asks Shailaja whose idiotic idea this is because if it occurs, her face would be disclosed and she wouldn’t be able to do anything. Armaan gets reprimanded by Shailaja, who claims it must be his.

Sam phones someone to halt the recording and swears she won’t spare Armaan for sure, but the call doesn’t connect, so she becomes furious and concerned. Before the last scene of the film concludes, the light turns on, and the video ends, Aditya approaches the screen. Sam is relieved and thanks Aditya while grinning. Aditya gives her a nod.

Without anyone’s knowledge, Goldie enters the residence once again. Aditya informs the reporters and guests that he is aware that everyone is interested in learning who will be his life partner, and while he will eventually reveal this information to them, since it is still early in the evening, he asks that they first enjoy the party before he makes the crucial announcement that they have all been waiting for. The waiter is then summoned to bring drinks to everyone. The reporters approach Aditya and inquire as to who is his wife—the person on the video or the person they just saw him with?

They also question him about his refusal to expose his wife’s identity to anybody. Aditya says nothing. Then he informs the reporters that a life partner and a soulmate are people who do not need external affirmation. They only know them because of their strong sense of loyalty to one another.

Trust is the cornerstone of this connection. He then turns to face Sam. Sam gives him a smile. Aditya implores partygoers to have fun.

The moment he spots Ginni, he turns away from the gathering of reporters. Sam grinned as she assumed Aditya was coming closer. Aditya halts close to Sam. Then he remembers Ginni’s counsel and admonitions about not believing Sam.

He then moves past Sam and in the direction of Ginni. Sam and the rest of the family are startled and perplexed. Aditya and Ginni exchange intense looks. Ginni muses on his options, and she doesn’t want him to make the incorrect choice.

Aditya observes her. Sam and Ginni Singh enter a room where the guests are not encircled. Amber questions why they are here now while the party is upstairs. When Sam sees the fictitious divorce documents for her and Goldie in Ginni’s hand, she becomes concerned.

Ginni claims that Sam imprisoned her in a room in order to prevent her from disclosing the truth to everyone. Everyone is perplexedly watching. Ginni interrupts Aditya as he begins to speak and begs him to let her finish. The kid Sam is carrying in her womb is not his, she continues, but she had told him that, but he didn’t believe her.

She may not be able to verify it, but she can show Sam that the divorce papers he was shown were fraudulent and provide him with the evidence. Sam and the others are startled. Aditya takes a glance at the papers. However, Sam pretends to confine her in a room and demands evidence from Ginni.

She continues by telling Aditya that Ginni accuses her repeatedly of not providing any evidence. She can demonstrate that the documents are authentic despite her exhaustion and refusal to act accordingly, asking Aditya to make the final choice instead. Even Aditya admits that he is sick of all this. Sam becomes perplexed.

Armaan responds to Aditya’s call by arriving at the location with Sam’s call list. Aditya tells the truth about how he obtained her call lists. Sam is startled. The audio recording of her disclosure is played by Aditya.

Everyone is startled. Sam is informed by Aditya that he carefully checked every word Ginni spoke throughout this time. The truth has a certain beauty that never changes. Sam gets hit by Shailaja.

Aditya is innocent and emotionally damaged, but Armaan reminds Sam that it doesn’t give her permission to take advantage of him. Sam is asked by Aditya why she did everything. Sam says nothing. Aditya describes Ginni as trustworthy.

Ginni breaks down in tears. Aditya tells Sam that he could report Sam to the police for what she did, but he won’t because he still has some human decency. Aditya is also asked by Rajvant not to utter anything like that. In front of everyone, Ginni folds her hand before leaving the area. Rajvant declines and breaks down in tears.