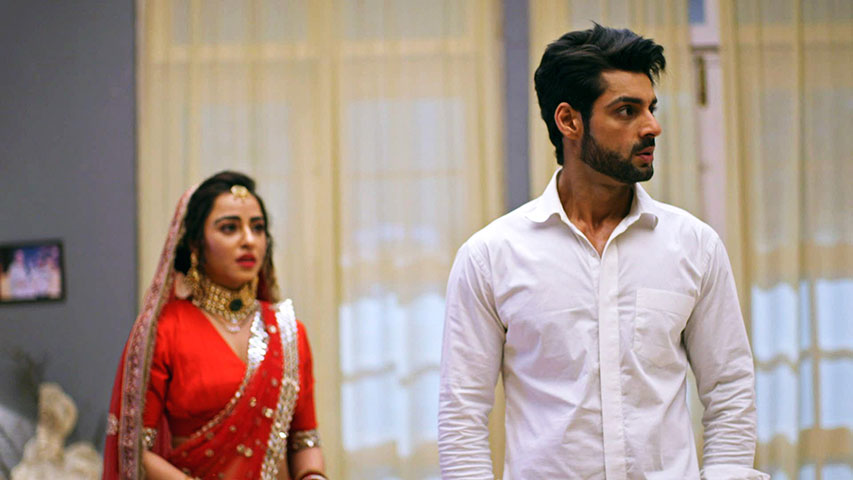 Supreet tries to give Ginni the jewellery that belonged to Aditya’s mother, but she refuses to take it. After some time has passed, Aditya and Ginni arrive to the conclusion that it is in both of their best interests to end their marriage.

Rajvant begins the episode by granting Aditya and Ginni his blessing. He thanks them with folded hands and praises both of them, claiming that it is only because of them that he has been able to maintain his reputation to this day. Aditya approaches Rajvant and expresses gratitude for the latter’s faith in him. He reminds him that after asking for his faith, everything is now in order.

Rajvant experiences emotions. Aditya and Rajvant embrace. The group then agrees to Rajvant’s suggestion that they all go out to supper together, but Ginni and Supreet stay behind. Supreet interrupts Ginni as she attempts to leave by stating that she wants to chat to her about something.

Later, Ginni gets ready and goes in the opposite direction of Supreet. Supreet informs Ginni that now that Aditya has accepted her as his wife, she is a member of the family and must take care of everyone, particularly Aditya. Supreet is informed by Ginni about the circumstances surrounding her marriage to Aditya, and Ginni attempts to convince her that the two of them are not compatible. Supreet advises her to change her perspective since being married to each other is what God wants and that’s why.

The jewellery box is then taken by her, and she gives it to Ginni while claiming that it belonged to Aditya’s late mother, Gurkeerat. Ginni declines, claiming that it is a tremendous burden and that it is not the appropriate moment to receive such a gift from her since everyone must be emotionally linked to Gurkeerat’s jewellery, particularly Aditya. Supreet makes an effort to persuade her. Shailaja arrives there and considers that while Aditya publicly accepted this dhaba waali as his wife, if he did so in private, she would lose all value in this home and she must take action.

She next visits Ginni and Supreet. Supreet’s jewellery is taken from her by the woman, who informs her that Ginni is correct in not desiring it. Ginni may be correct, but Supreet is Aditya’s wife and has complete ownership rights to this jewellery, says Shailaja as she hands Ginni the package. Supreet requests that Ginni look after the family members as well as the jewellery since she is now a member of the family.

Aditya could accept her in front of everyone, but Ginni considers that because she only knows the truth, she should respect his feelings. Shailaja muses to herself that if she allows Supreet and Ginni’s friendship to deepen, she won’t be respected in this household. Supreet offers to assist Ginni in getting ready. Supreet is informed by Ginni that she accepts the jewellery but that she won’t be wearing it straight away.

Supreet was ready to speak when Shailaja cut her off and urged her to consider Ginni’s views as well. Supreet accepts and requests that Ginni wear it to any upcoming family gatherings. Ginni says nothing. Aditya and Armaan share a drink on the opposite side.

Aditya is asked by Armaan whether he is prepared to listen if he wants to share anything with him. Aditya requests that he quit being like a bothersome girlfriend and utter whatever comes to mind. Armaan recalls Aditya how he fell into Sam’s trap and became a fool, but Ginni made sure he was aware that Sam was lying and that she had suffered much as a result of him and his family. He encourages Aditya to thank Ginni, stating he knows it’s difficult for him but he must try, explaining that if it weren’t for her, he may have been married to Sam and there might not have been a happy ending.

He also commends Aditya for making the smart choice to accept Ginni as his wife in front of everyone. Aditya says nothing. After that, Armaan tells Aditya that Rajvant has ordered him to go to his room. Ginni is reluctant to enter the space.

When Aditya arrives, he is shocked to find Ginni. They both look at one another intently. Aditya enters the room and unlocks the door. The decorations in the room astound him.

He then walks inside the space. Ginni hesitates before going inside and locking the door behind her. Aditya visits Ginni and informs him that he erred in not imprisoning Sam. She also tells him that if she can trick someone as smart as him, he should consider Goldie.

She continues by asking him why he let go of Sam. Aditya tells her to calm down and explains that she married him in order to defend her brother’s honour. He also urges her to consider the possibility that Goldie would harm himself if he sends Sam to jail. Ginni nods in agreement after realising what Aditya is saying.

Aditya continues by saying that he is aware of Sam’s potential but that Goldie loves her so much that despite all that has occurred, he has chosen to take her into his life. All they can do is wait and hope that Goldie’s love for Sam transforms Sam. Ginni reflects to herself that, in contrast to Aditya, she solely considered Goldie’s existence as a sister. When Aditya remembers Armaan’s suggestion to thank Ginni, he tells her he wants to share something with her.

He battles. Ginni greets him and quips that she realises he’s having difficulties saying “thank you” since he’s Aditya Raj Singh. She is disregarded as Aditya sits down on the bed to take off his shoes. What will they do next?

Ginni queries. Aditya says she may have the bed and he will sleep on the couch. Ginni informs him she is not talking about today’s sleeping arrangements but about their existence and its future, which she is convinced isn’t proper to live with one another. Aditya affirms her accuracy.

Both of their motivations for getting married are meaningless, so they must now figure out how to end their relationship. Then he says that while convincing Rajvant is difficult, it will be simple if they both work together. Ginni concurs. Aditya is then encouraged to take the bed, but he refuses, so Ginni goes and lies on the bed.

They both nod off. Aditya slipped off the couch while he was sleeping, and Ginni discovered this when she heard a noise. She went to cover him with a comforter and place a pillow under his head, but Aditya rested his head on her hand, and she decided to remove her hand without waking him up.