Let us explore the written update for the most recently published installment of the charming show Channa Mereya introduced on Wednesday, 7th September 2022. Ginni Takes Care of Aditya is the subtitle of the cool episode number S1 E53. 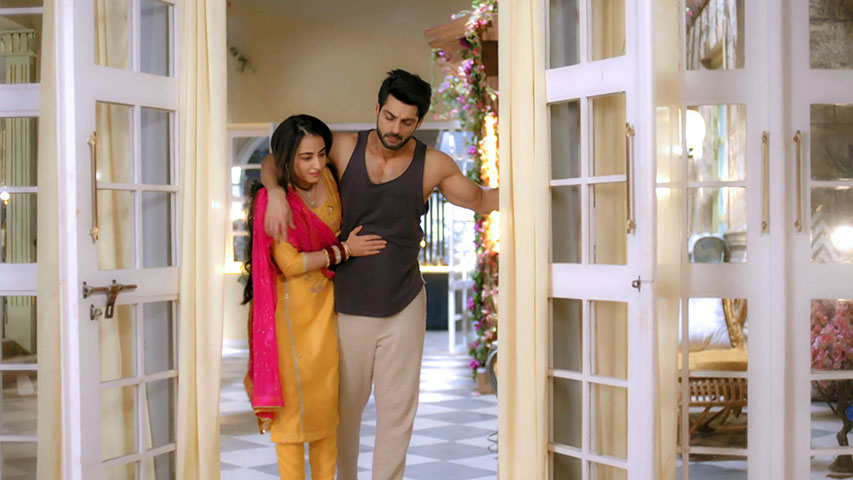 At the beginning of the episode, we heard Aditya on the phone, assuring a person who he would be there in one hour and requesting that they come there on time. After that, he gets started on his workout. Even though he is dizzy, he continues to exercise. He saw a glass of juice and started walking towards it, but as he got closer, it toppled over and broke.

Ginni, who arrives there, is taken aback and immediately runs to Aditya. She inquires about what took place with him. Aditya insists he is alright and attempts to get up, but he cannot maintain his equilibrium. Ginni gets to him in time.

They both look at one another and have an eye lock. Ginni reprimands him and then leads him to his room, where she places him on the bed and rearranges the bedding and the surrounding area so that he is as comfortable as possible. They once again made eye contact with one another. The song “Dil Diyan” may be heard playing in the background.

When Ginni’s hair falls on Aditya’s face, he immediately covers his eyes. Ginni notices Aditya is sweating heavily, so she gets a towel for him and returns to the room. She assists him in drying off the perspiration. Aditya is gazing at her.

After that, he informs her he has had enough and that he has to go to the workplace. Ginni tries to convince him he has to go to the hospital, but Aditya is unmoved by her advice, so Ginni assists him in locating his clothes. After that, she tells him to put on his dress and that she will bring him dinner; after he eats, he will need to take his medication, and then he will go. She saw Aditya was having difficulty donning the garment, so she assisted him.

Aditya assures us he will handle it. Ginni reprimands him and then assists him in putting on the clothes. Aditya nods off and goes to sleep. Ginni takes his temperature, and upon discovering that it is abnormally high, he becomes concerned.

Shailaja went to Aditya’s room and checked on him after hearing about his condition. She inquires about Aditya’s well-being with Ginni. Ginni informs her that Aditya is running a fever. Shailaja is taken aback, and she immediately asks Ginni what she has done to Aditya.

They threw Ginni off her game. It seems like Shailaja is looking at something on Aditya’s bed. Ginni attempts to prevent her from coming and attempts to keep her from waking up. Shailaja keeps pressing Ginni for an answer on where she stored it.

Ginni explains to her she does not comprehend what she is talking about. She informs her she must have performed some kind of dark magic on Aditya because she wants the Nimbu that she used on him. Shailaja begs her not to act and tells her she knows she did it. Ginni gives an amused eye roll.

She tells Shailaja that she is going to fetch food and medication for Aditya and then leaves the location, asking Shailaja to watch after Aditya in the interim till she returns. Shailaja is stunned. Aditya receives a bowl of soup from Ginni. Supreet arrives at the location and inquires as to what it is that she is doing to her.

When Ginni informs her about Aditya’s fever, she makes the executive decision to prepare her father’s top-secret dish for them, which he always prepared for them whenever she was sick as a kid. Supreet grins and then asks Ginni about the staff. Ginni informs her that she has permitted them to go. Because she is the one who handles all of this, Supreet instructs her to inquire with her before granting employees hereafter any kind of leave of absence.

Ginni extends her apologies to her, but Supreet brushes them off by claiming that the incident is not that significant, although she does advise Ginni to be more cautious from now on. Ginni is also informed by Supreet that Aditya would not consume this soup, but that Aditya does have his soup. Ginni wants her to share the recipe with her so that she may cook it, so she asks her to do so. Supreet instructs her to look after Aditya in the interim while she prepares the soup.

In this manner, she will have the opportunity to provide some kind of assistance to Aditya. Ginni obliges and chooses to depart. Supreet gives Ginni’s homemade soup a taste test. She lauds her and Rajvant’s choice to make her their daughter-in-law and says it was the right one.

Ginni gives a kind grin before leaving the location. As Shailaja observes this from the outside, she becomes more enraged. Shailaja leaves the living room and walks to her chamber, where she erupts in front of her husband. Her husband confronts her with the question of why she is wasting her time worrying about what they do not have when they have everything else.

Shailaja draws parallels between the lifestyles of her husband and Amber. She goes on to explain that she is concerned that Aditya and Amber, as well as Supreet and Ginni, would lose all of their influence in the Big Brother house if they band together, and she tells them that she needs to do something about this situation. Ginni enters Aditya’s room and places a damp towel on the young man’s head. She takes his temperature to ensure his safety.

After that, she had a conversation with herself regarding Aditya’s obstinacy. She scolds him for not listening to her suggestion to sleep on the bed, as well as for the temperature of the air conditioner being too high, and she argues that both of these things are the reason he is sick now. Aditya awakens and hands her the Patti before instructing her to cover her lips with it since he finds her constant arguing to be quite irritating. Ginni reprimands him and tells him to go to bed early.

After Aditya’s complaint that water droplets from the towel were getting into his ear, Ginni inserted a sponge inside his ear to absorb the moisture. Aditya admonishes Ginni to keep her mouth quiet. After that, he succumbs to sleep. Aditya receives a bowl of soup from Supreet.

She makes the decision to check on him, but since she remembers his warning, she has some reservations. Supreet offers Supreet the suggestion of feeding Aditya his soup in the interim while she retrieves his medication, and then she exits the room. Supreet is now lounging close to where Aditya sleeps. Ginni makes her way back and implores Supreet to give him something to eat.

Aditya, who is in a drowsy mood, consumes the soup while mumbling “maa. ” Ginni and Supreet both express joy and astonishment at the same time. After that, he wakes up, finds Supreet, and becomes infuriated when he sees her. He tells her that she can never be his mother and asks her to leave the house because he wants her to stop behaving like his mother by preparing a dish that his mother used to make.

Supreet departs. Ginni extends her apologies to Aditya, stating that she believes the two of them have some kind of little misunderstanding, but that she does not believe that Aditya hates Supreet the most. After that, she requests that Aditya take his frustrations out on her instead. Aditya wonders whether she would ever be able to forgive if it turned out that another person was responsible for the death of her father.

Ginni is stunned. Aditya reveals to her that Supreet is the person he believes to be responsible for the death of his mother. Ginni loses her ability to communicate.