Ginni, who is upset at the theft of Khushwant’s cookery notebook, swears under oath to track down the thief. After some time has passed, she is taken aback when she sees Amber holding it. 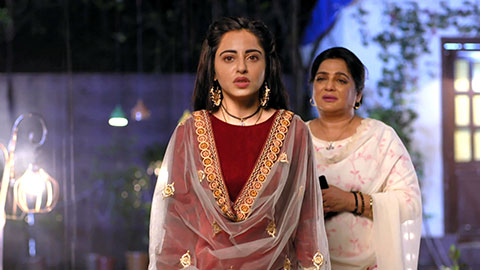 Get to know the written update for the new story of the beautiful TV drama Channa Mereya provided on Wednesday, 14th September 2022. Ginni Takes an Oath is the label of the ultra-modern episode number S1 E59.

At the beginning of this episode, Ginni advises Aditya that in order to make someone else really happy, he must first figure out on his own what it is that brings them the most joy. She then makes the decision to go, but Aditya prevents her from doing so and tells her to use the money like a blank check and purchase anything she desires. Ginni storms out of the location in a huff. Aditya is perplexed as to what it is that he has done incorrectly now. While Ginni is contemplating Aditya’s remarks, she accidentally runs into Akash.

They both hit the ground and then got up. Akash expresses his regrets to her. The conversation continues with him expressing his gratitude that it is not his father but rather a woman, since if it were his father, he would have taken his skateboards. Ginni remained mute. Akash confronts her and asks her why she is behaving so monstrously right now.

Because she is always around him, has she started to mimic his behaviour? Why has she become different in this manner? He has seen Aditya improve while spending time with her, but now that she is spending time with him, her whole attitude has shifted, and he claims that she is an angel while Aditya is a monster. However, she is not intended to behave like him or develop into an individual similar to him. Ginni comprehends what Akash has been trying to convey to her and acknowledges that he is correct.

Akash exits the location. Ginni is under the impression that she should avoid developing Aditya’s traits. At the residence of the Grewals, Simran yells at Shampy and Dimpy for deceiving the customers by giving them a false expectation that they would have food served by Ginni, which is the reason why the customers humiliated themselves and left the dhaba. She then requests that Goldie remind Gulraj that they are unable to operate this dhaba without Ginni’s assistance, and she requests that Gulraj tell Ginni about the status of the dhaba and have her come here every day to spend time assisting them. Gulraj loses his cool and yells at Simran that her children may lie, but they would never behave in such a despicable manner as she does at any point.

Also, about Ginni: she is now married, and as a result, she is accountable for the wellbeing of her in-laws. Ginni instructs Goldie to inform Simran not to adopt Ginni’s name as her own. They begin to argue with one another, and Goldie does her best to stop it, but she is unable to. In her rage, Gulraj approaches Simran while holding a fire torch in her hand. This prompts Goldie to step in between the two of them and causes Gulraj to lose control of the fire torch she was holding.

After that, he begs them both to put an end to their argument so that he may have a conversation with them. The ringing of Gulraj’s cell phone causes the group to be diverted for a moment. Gulraj realises that Ginni is the one who is phoning her, so she goes to her family and cautions them not to share any information with Ginni regarding the state of the dhaba with her. In the event that any of them deceived her in any way, she will show no mercy and immediately respond to Ginni’s request. She assures Ginni that she will pay her a visit.

Ginni is now waiting for Gulraj inside the home. When she thinks back to what Aditya said, it makes her angry. After that, she notices that someone is touching her shoulder with their hand. She believes it to be Aditya, so she begs him to take his hand off her shoulder, and she refuses to accept his apologies. After that, she is taken aback when she sees Gulraj there.

Gulraj inquires as to who she believed she was and inquires further as to why she is unable to take their apologies. Ginni reveals to Aditya that it is her, and the two of them engage in a brief debate. According to Gulraj, these kinds of conflicts are normal between husband and wife, and the fact that they occur is what brings them closer to one another. Ginni shifts the conversation’s focus by informing Gulraj that she got a phone call from Mrs. Randhawa, who said that she believes the man she saw with her father to be her father’s business partner.

Ginni’s story comes after Gulraj expresses his confusion over Mrs. Randhawa’s claims. She continues by saying that if she discovers who he is and obtains a copy of her father’s journal, they would be able to alter the future of their dhaba in the manner in which Kushwant had envisioned it. Gulraj becomes overcome with emotion as he reflects on what had taken place earlier at the dhaba. Ginni inquires about what transpired.

Gulraj informs her that she became upset as she recalled the close relationship her father had with the journal. She also reveals to her that her father’s memory loss worsened after he lost the journal and that she is certain that the person who now has the journal is also to blame for her father’s death. Ginni realises that Gulraj is concealing something, so she asks her what it is; nevertheless, Gulraj reassures Ginni that there is no need for her to worry about it in any way since she was concerned about her father’s journal. Ginni promises Gulraj that, at whatever cost, she will locate the diary and looks on with resolve. Amber goes downstairs with the intention of burning the journal in order to eliminate the evidence that has been gathered against him and prevent Ginni from getting to him.

He moves his hand forward to light the journal on fire, but Ginni walks into the room at that moment and is taken aback when she sees the diary in Amber’s hand. The journal is concealed behind Amber’s back by him. Ginni inquires about Amber’s journal, to which the latter responds that he does not keep one and displays his hand. Ginni is taken aback when she realises that he isn’t holding the journal. Amber remembers that he concealed it in a candy box behind himself and that she found it afterwards.

After that, he tells Ginni that she has to go get some rest since the thoughts from the journal have absorbed her and caused her to think in this manner. Shailaja gives the worker the instruction to place the sweet box containers in the vehicle so that they may bring them to the temple to be served. The employee complies with the request and takes the candy boxes with him. In a state of bewilderment, Ginni makes her way to her room. The Facebook post depicts a scene in which Kushwant cautions her against making any blunders while she is writing in the journal.

Ginni assures him that errors are possible at times, but Kushwant retorts that this journal is really significant to him, and he asks Ginni whether or not she is even aware of the cost or worth of it. Ginni says the price of the diary is fifty rupees, and he purchased it from a store not far away. Kushwant chuckles and tells her that the value of the journal is comparable to that of his life. If something were to happen to it, then it is certain that it would pass away. Ginni begs her father not to bring up the subject of death since she does not want to think about it.

Kushwant complies with her request and kisses her on the forehead. The end of the FB Ginni is crying her eyes out. Ginni is asked by Aditya to explain the reason she is sobbing once he arrives at the location. Ginni refuses to acknowledge to him that anything is personal, and as a result, she will not discuss anything with him. Aditya becomes agitated and tells her that since she is his responsibility, he should take good care of her; otherwise, for one, she will have to remain in this place for a longer period of time, and for another, Gulraj will question him; therefore, he begs her to explain what it is that is bothering her.

Ginni continues to be defiant and makes the decision to leave the location. However, Aditya draws her near him and asks that she disclose the source of her tears. Ginni fixes her gaze on Aditya.