Ginni is overjoyed to witness Aditya’s kind gesture for her, and at that time, the two of them have a tender moment together. Later on, when Ginni recognizes the perpetrator of the shooting, Amber’s anxiety levels rise. 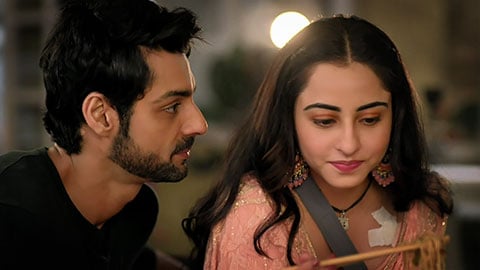 Get to read the written update for the original sequence of the riveting television broadcast Channa Mereya provided on Tuesday, 27th September 2022. Aditya, Ginni Share a Moment is the designation of the trend-setting episode number S1 E70.

The episode begins with Ginni taking the leaflet in her hand, but before she can read it, Aditya grabs it and tells her that Chinese is ready. She decides to grab it from him, but Aditya tells her they should eat it and then take her with them. They are both sitting on the dining chair. Aditya hands her a chopstick and requests that she uses it. Ginni claims she has never used a chopstick identical to Gulraj’s stitching stick. Aditya chuckles and promises to show her how to utilize it.

He then demonstrates how to hold it. He also approaches her and modifies the way she handles the chopstick. Ginni glances at him. Aditya returns to his seat. They both begin eating the noodles. When they both see the same noodle, they both order it.

Their mouth is on one end, while their partner’s mouth is on the other. They both lock their gaze on one other. Ginni forbids herself from having it. Ginni seems uneasy when Aditya grins and glances at her. She lowers her gaze. She then begins to eat the noodles.

After she eats it, Aditya tells her they should have dessert and that he will give her medication as a treat. Ginni chastises him for destroying the mood by mispronouncing the name of the drug. Aditya taunts her before taking medication from the room. He comes to a halt as he notices Ginni’s hiccups. Aditya inquires about the explanation, and Ginni explains that she used to have hiccups whenever she ate noodles. Aditya grabs her hand and pulls her closer to him.

Ginni is taken aback and glances at him. They exchange glances and have a brief moment together. Aditya takes a step back and says, “This is a new approach to stop the hiccups, and it’s called shock treatment,” before leaving the room. Ginni wonders whether this is a new treatment or anything. Later, Ginni refuses to take the medication, so Aditya pretends to take it, prompting Ginni to seize the pill and consume it. She then realizes Aditya duped her into giving her the pills.

Aditya gives her a kind grin. When Aditya gets a call from Pasha, he leaves Ginni. Pasha informs Aditya that based on Ginni’s identification of the gunman, he has sent a few images to him and requests that he display them to Ginni. Amber enters the room and requests that Ginni examine the photographs he has received from his connections, compare them to the description she has provided, and identify the shooter. Ginni glances over the images and knows they aren’t the ones. Aditya requests that Ginni see the images sent by Pasha.

Ginni notices and informs him that no one in this room is a shooter. Aditya puts the phone in his palm just as another snap arrives, which he shows Ginni. Ginni claims that the guy in the picture seems to be the shooter, but she is unsure. Amber advises Ginni to take her time and provide accurate information since her identification will endanger someone’s life. He then excuses himself to make a phone call and exits the building. Ginni becomes agitated and concerned.

Aditya pushes her to remember and concentrate on her descriptions. Ginni looks over the images again and informs Aditya that the final photo given by Pasha is of the gunman. Aditya decides to face him. Ginni stops him and tells him she will follow him since she is familiar with Amritsar. Aditya points to her condition and assures her that she would not be in danger. Ginni expresses her concern for his safety and the dangers he is taking.

Aditya tells her he is going to stop the risk, makes a vow to be safe, tells her this is the first promise he has made that he would not breach and begs her to relax before leaving the site. Ginni becomes concerned and prays to God for Aditya’s safety. The gunman in his hiding place converses with someone on the phone. He informs that person that no one can locate him and requests that person investigate who is collecting information about him. Aditya arrives and takes hold of the wood in the shooter’s hand. He informs the gunman that he, too, wants to know who sent him.

The gunman inquires as to his identity. Aditya shows his face and kicks him, then pulls out a knife and inserts it into his neck, demanding to know who hired him. The gunman informs Aditya that his contractor is in the next room, prompting him to accompany him. Ginni is praying to God. Amber arrives at the shooter’s location, thinking he must do anything to prevent Aditya from discovering the truth. Aditya notices a guy waiting in that room.

He places his hand on his shoulder at the same moment someone puts their hand on Amber’s shoulder. When the guy turns around, Aditya does not know him and asks him why he is attempting to murder. The guy blames Aditya and his family for dismissing him despite his years of hard work. Aditya starts a battle with the males in the room. Amber looks around and notices his soldiers. Amber is relieved when his soldiers inform him that the assigned task has been performed.

At some time, a guy struck Aditya with a bottle, making him dizzy. With a knife in his hand, the gunman approaches Aditya. Amber interrupts the gunman and asks him how dare he tries to hurt his kid before engaging in a fight with other thugs. Aditya reflects on his childhood recollections and his current contacts with Amber. They then engage in combat with the thugs. They all collapse. Amber informs Aditya that he learned about his location through his guys and tells him that he tried to contact her first but failed but compliments Aditya. Tears spring up in Aditya’s eyes.