Virat and Sai are pursuing the thugs who are responsible for Savi’s kidnapping. After some time has passed, Savi gives Virat her live location through Gulab Rao’s phone. Virat immediately makes his way to the area. 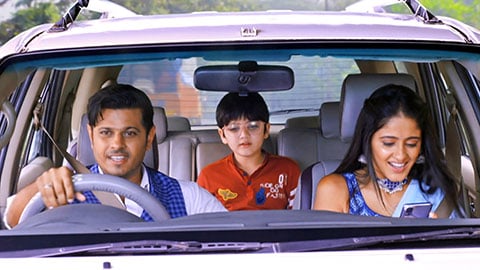 The episode begins with Gulabrao’s thugs taking Savi as Sai, Virat, and Vinayak watch in shock. Sai is the only one who doesn’t get startled. They move quickly in an attempt to halt them but are ultimately unsuccessful. Virat reassures Sai that they will locate Savi and urges her to maintain her composure while Sai begins to feel anxious. She announces that she cannot bear to see Vinayak suffer in isolation and begs them to bring him along.

They jump inside the vehicle, and Virat begins driving at high speed to capture the thugs. Meanwhile, Vinayak expresses his anxiety about Savi and asks Virat whether or not they would be able to rescue her. In this part of the conversation, Virat reassures Vinayak that nothing terrible will happen to Savi and asks him to continue to pray for her. While all is going on, Gulabrao is chuckling to himself while riding along with Savi in his automobile. While Savi is on the phone with her mother, he chuckles to himself as he recalls his scheme.

Gulabrao successfully catches her, and after giving Savi a warning, he terminates the conversation. Virat and Sai both get concerned about Savi, and Savi’s mother sobs because she misses her daughter. Virat proclaims that he would punish everyone who has done wrong. He shows Sai and Vinayak that he is comfortable with them. On the other hand, at that moment, they were given the whereabouts of Gulabrao thanks to Savi’s quick action.

While Virat was asking Sai to transmit the location to his phone, she inquired as to whether or not his phone number had changed. The two of them then swapped phone numbers after he responded that it was the same as before. Gulabrao reprimands Savi for being too intelligent, and he decides to educate her on the subject. Meanwhile, Pakhi thinks back to her history and remembers how Virat decided to adopt Vinayak and how they traveled to the orphanage together to adopt Vinayak. The orphanage administrator confronts Virat and Pakhi with inquiries about their relationship, to which he responds that the two of them are not married.

Virat’s first marriage ended in divorce. He opens out to them about his suffering as Sonali wonders who will marry Virat and who would be able to relate to what he is going through. At that moment, Ninad is reminded of Pakhi’s name, and she manages to persuade both Virat and Pakhi to give their romantic connection another go. Pakhi and Virat realize, with the help of Chavans, that they have both experienced the loss of their lovers and need someone who can care for them. During this time, they are both talking about their concept.

Virat reflects on his history with Pakhi and expresses his regrets that he could not keep his commitments to her. He says that, at long last, there is an opportunity for him to make up for his transgressions. Additionally, to adopt Vinayak, Virat and Pakhi were married. During the ceremony, Pakhi became anxious when she dropped the vermilion. She talks about it with Bhavani and Ashwini when she does, since it makes her uneasy.

While Harini mocks them for their antiquated mentality, they soothe her and offer her support. When Bhavani sees Harini, she becomes enraged with her, but Sai, along with Virat and Vinayak, is startled by Savi’s condition and becomes concerned for her well-being.