Virat is unwilling to contact Sai for Vinayak’s treatment despite the several pleas that Vinayak has made. After some time has passed, Virat tells Vinayak a tale and then urges him to forget Sai and Savi. 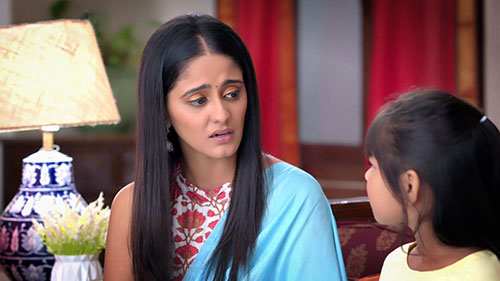 Get to read the written update for the popular chapter of the stirring TV show Ghum Hai Kisi Ke Pyaar Mein (GHKPM) provided on Tuesday, 27th September 2022. Virat’s Rigid Decision is the label of the groovy episode number S1 E622.

The episode begins with Virat lashing out at Bhavani and accusing her of being responsible for Vinayak’s illness. He scolds her for putting Vinayak through so much misery, then storms out. Bhavani is taken aback by his actions and declares that Sai is unlucky for them. She claims everything has gone wrong since they heard her name in their home. Pakhi, on the other hand, attempts to soothe Bhavani. She apologizes for Virat’s actions, claiming he was worried for Vinayak.

She tells Bhavani that Virat did not mean what he said to her and asks her not to take his comments seriously. Bhavani nods in agreement with Pakhi’s remarks. She becomes enraged when she thinks about Sai, but Virat seeks to get the finest specialists for his baby. Meanwhile, Savi longs for Vinayak and resolves to contact him. Pakhi receives the call while holding Vinayak’s phone. When Ashwini and Bhavani see the name, they tell Pakhi not to accept it.

Bhavani demands Pakhi cut Savi’s ring and requests that the number be deleted. She declares that their family should avoid Sai and Savi. On the other hand, Savi is distressed and informs Sai that Vinayak has not returned her call. Sak requests that she forget about Vinayak, but the latter refuses. She begins to weep, while Sai feels irritated and unable to manage the situation. In other news, Usha encounters Jagtap when he inquires about Sai’s purchase of tickets.

She informs him that he has finally agreed to return to Nagpur. Hearing this, Jagtap is saddened, but he pretends to be happy, claiming that Savi will soon meet her biological father. Sai ignores Jagtap and walks away, concealing her grief from them. Virat brings physicians into Vinayak’s chamber while the latter insists on only being treated by Sai. Virat attempts to explain himself and claims to have beaten doctors, but the latter refuses to be treated. Virat becomes enraged at Vinayak for continuing to use Sai’s name while the doctor tells him to calm down.

He also suggests bringing the doctor, which Vinayak had requested since the latter is devoted to her, but Virat refuses. Pakhi worries about her kid and attempts to massage him with Sai’s herbal paste. Virat becomes enraged and tosses it away, stunning her. While Pakhi laments her son’s health, he advises her not to utilize any of Sai’s products. She confronts Ashwini, recalling how she and Virat struggled for Sai’s education and how, now that she is one of the most outstanding physicians, they refuse to let her treat Vinayak. When he sees his son’s condition, Virat breaks down, and Ninad attempts to calm him down.

The latter tells Virat that everything will be alright and offers advice. Conversely, Virat is confident that he will not allow Sai to heal his kid. Meanwhile, Virat devises another explanation for Vinayak and persuades him to accept his parents’ choice. Finally, the latter takes and commits Virat. Furthermore, Pakhi weeps when she sees her son’s suffering and discusses it with Ashwini, who asks her not to use Sai’s name. Whereas Harini addresses Bhavani and argues that she cannot govern everyone’s life, the latter becomes enraged.

Meanwhile, Vinayak slips out of bed, and Pakhi becomes concerned about him. He asks her not to worry and tells her that he is OK. She becomes distraught when she sees him and vows to take serious action for Vinayak.