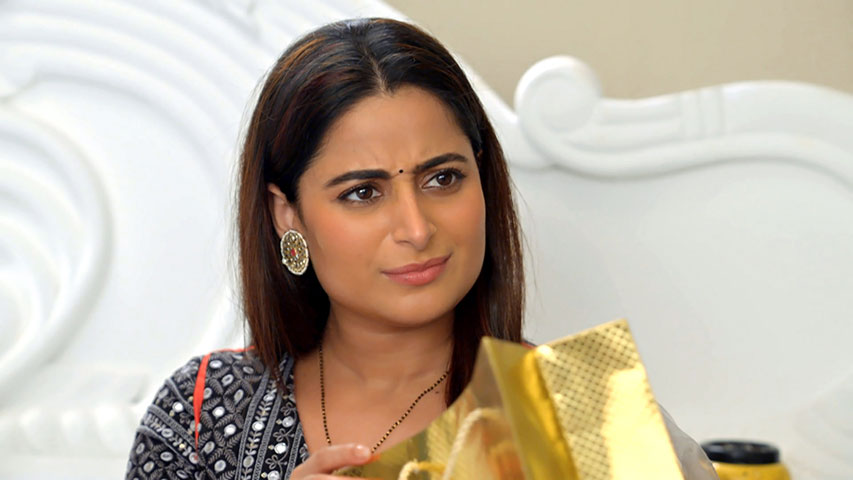 They show Pakhi conversing with Savi at the beginning of the episode, and she seems to enjoy their discussion. After that, she has a meeting with her mother and asks the latter if there is somebody more experienced living in their home. Usha receives the phone from Savi, who then hangs up. While Pakhi is speaking to Usha, Usha realises she has heard Pakhi’s voice before and informs Pakhi about it. Pakhi responds by saying that she has never been to Kankauli and so does not recognise them.

She then discusses how Savi’s mother treated Vinayak, while Usha invites her to visit anytime she and Savi both feel like it. They put an end to the call, and Vinayak is now looking forward to meeting Savi. Virat returns to his room, where he finds Vinayak and Pakhi engaged in conversation about something. When he asked about the situation, she said that it was something that should be kept between a mother and her son. While they are all having a good time together as a family, Virat shows them the goods that he has got for them.

He hands Vinayak’s snacks to him and then shows Savi the presents he got for her. The sight of the back pillow for her causes Pakhi to feel sad, and when she looks at Virat, he tells her he has seen her struggle with the pain. Then, Pakhi turns away. The joy it brings her causes her to express her appreciation to him. In the meantime, they had planned to go together to Kankauli.

Virat communicates with the host about the guest home he had reserved and then spends some time with his family. In other places, the women laud Sai for completing such a difficult birth. They explain to Haria how Sai could rescue Gayatri and the baby. The latter had an emotional breakdown and expresses regret over Sai’s having questioned her abilities. She explains to them the significance of having a hospital in the community, and although they express their support for the idea, the goon who Gulabrao employs to provoke them against Sai continues to do so.

The latter sees Sai and becomes enraged because his plan has been unsuccessful. When Sai arrives back at her home, she finds Savi making exciting preparations for Vinayak’s visit. While Sai is assisting Savi with creating modaks, she briefs Sai on the latest developments. While Mohit is telling Pakhi about the challenges they are facing in their company, they are becoming thrilled to receive Vinayak and his family. Her surprise leads her to inquire about what’s going on.

Up ahead, Chavan chastises Mohit for being unable to handle a minor situation while explaining how the client filed a bogus lawsuit against them. Mohit’s inability to manage the matter is the focus of Chavan’s criticism. Pakhi responds by saying that the treatment of Vinayak is the most important thing to her and that she can’t miss it. This causes him to become concerned, and he explains the potential outcomes. She becomes concerned, but Omkar reassures her that he will manage whatever is happening.

Chavans and Mohit both say that they don’t trust Omkar, and they demand that Pakhi should be the one to take command. She found herself in a difficult situation and was unable to make a choice. She withdraws herself from the situation while everyone else feels sorry for her. She is brought back to all of Virat’s calming words, as well as the memory of how the two of them had intended to spend some quality time together. When she thinks about the difficult circumstances, she becomes dejected and finds herself in a predicament.

Continuing, Virat enters Pakhi’s chamber and attempts to comfort her there. He gave his word that he would watch out for Vinayak and that he would keep her informed of the situation. He was inspired by her, and he insisted that she was the only one who could successfully run the company. While she looks at him with a grin, he gives her encouragement to show the customer her reputation. He is successful in persuading her to handle the business situation, and he decides to take Vinayak along with him to Kankauli.