Vinayak is brought to Sai’s house by Virat so that he might get medical care there. After some time has passed, Virat assaults Gulab when the latter obstructs him on his way back and humiliates the character of Sai. 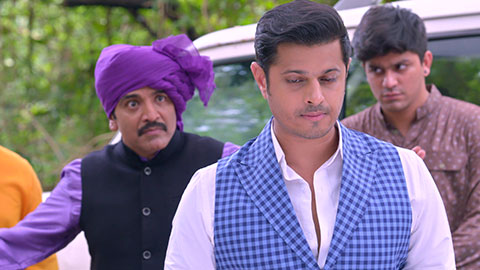 Get to read the written update for the recent installment of the pleasant serial Ghum Hai Kisi Ke Pyaar Mein produced on Monday, 12th September 2022. Virat, Gulab’s Heated Face-off is the subtitle of the original episode number S1 E609.

Ashwini comforts Pakhi at the beginning of the episode and promises that Virat will eventually embrace their love. She remembers how Pakhi encouraged Virat to adopt Vinayak and helped him when needed. She sees visions of how Virat used to see Vinayak often, finding solace in his company. He expresses his emotions to Pakhi, who grins at their connection.

After that, she has an idea and asks him to adopt Vinayak. She explains that he lost his kid and that Vinayak has the same name as his son. Virat agrees when she says Vinayak would give him a reason to live. Ashwini claims that they only met Vinayak due to Pakhi’s advice.

She offers Pakhi a helpful tip to express her thanks for saving Virat’s life. Bhavani arrives at that point and concurs with Ashwini’s remarks. Virat, according to Pakhi, is still grieving for Sai and isn’t prepared to move on. Ashwini asks Pakhi to assist Virat in letting go of the past.

She says that he has already begun to give their relationship a chance and asks him to take advantage of the possibility. Additionally, Bhavani exudes faith in Pakhi and thinks that she is capable of anything. They cheer Pakhi on, and she becomes tearful when she expresses gratitude for their inspiration. Meanwhile, Sai treats Vinayak in silence before taking him to his home with Virat.

Vinayak says his appreciation to Virat after being shocked to see Sai’s home. He meets Savi, and the two of them are overjoyed. While Savi is upset with Virat for his previous actions and refuses to speak to him, Sai and Virat enjoy the relationship between Savi and Vinayak. Virat apologizes to Savi and pledges not to make the same mistake again.

Sai tears up watching their association but keep it from them as she finally forgives him. She then invites Vinayak and Savi inside to begin the procedure while Virat inquires how long it would take. Virat leaves the area as she informs him about it. In the meantime, Virat misses seeing Jagtap’s vehicle as it passes in front of him in the meanwhile.

In the distance, Jagtap’s pal continues making fun of him about Sai, but he insists he has no affection for her. While Ashwini, Pakhi, and the other Chavans begin to get ready to receive some critical visitors. When Pulkit arrives, they begin to discuss the significance of those people. Pakhi inquires about the unique visitor, and the latter responds with a grin.

Vinayak receives treatment from Sai and is advised to take care of his legs. They continue to explore the area in the meantime, and Sai likes spending time with the children. In the meantime, Gulabrao sees Virat and recognizes him as the policeman who rescued Savi from his supporters. He confronts the latter and orders him to avoid Sai; when he disparages Sai’s character, Virat becomes enraged and responds appropriately.

Sai arrives there simultaneously and becomes concerned upon observing the circumstances. Later, Virat becomes enraged and smacks Gulabrao for his negative remarks about Sai and their relationship. The latter grows enraged and issues Virat a warning. Virat loses his composure and begins pounding them as he continues to make fun of Sai and their love.

While Sai is startled and tries to stop Virat, he manages the goons and Gulabrao. On the other hand, Savi never stops encouraging Virat to defeat the thugs.