A angry Virat confronts Sai with questions about Savi’s paternity, and this causes tension between the two of them. Later on, Sai’s world is devastated when thugs working for Gulab Rao assault Virat and kidnap Savi. 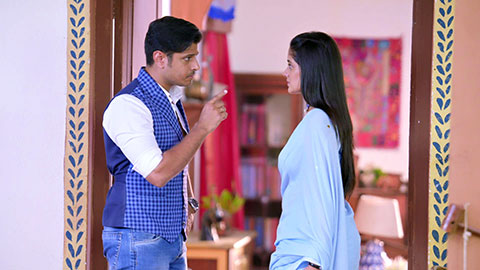 At the beginning of the episode, Pakhi is on the phone with Virat as Vinayak is handing him his phone. The latter begins chatting with her as she expresses worry about what is happening to the former. She inquires about his injuries, but he is dishonest with her and says that he is doing well despite his injuries. He then hangs up, explaining that he has a lot on his plate and that he would get back to her as soon as he could. In the meantime, Sai becomes envious after seeing that Virat was chatting with his wife.

She then enters the kitchen and makes an effort to distract Usha by keeping her busy with the work while Usha observes her and inquires about the situation. She states that Sai is impacted by Virat’s presence and is worried about his current life. In response, Sai claims that she does not care about him and denies that she is concerned about his life. In this part of the conversation, Sai explains that all she wants to do is assist Vinayak and that she is now awaiting his recovery. She asserts that being in the same room with Virat has no impact on her in any way.

In the meantime, Usha attempts to make her understand and urges that she clear her differences with Virat, but Sai rejects the notion and reminds Usha of all of her sorrows while declaring that Virat does not care about her. Usha’s efforts to make Sai understand are unsuccessful. Sai thinks back to the past and points out to Usha that he never even made an attempt to look for her. During this time, Pakhi begins to get a sense of unease after hearing a familiar voice but being unable to identify the speaker. After that, she expresses her concern to Ashwini and says a prayer for Virat and Vinayak’s well-being.

Together with her, Ashwini offers prayers to the Lord and expresses worry for Virat and Vinayak. Virat leaves somewhere else with the intention of taking Vinayak with him, but Vinayak asks to remain with Savi for a little while longer. Virat complies with this request. Virat nods his head in assent to his request and grins as he watches the children play. On the other hand, Sai is also there and makes an attempt to help Virat, but Virat refuses to accept her assistance.

They start their argument by accusing each other of forgetting about them. Sai accuses Virat of not watching over her when she left the home, while he points out the circumstances and tells her that he attempted to prevent her from leaving, but she was insistent about continuing on her way. Sai and Virat get enraged with one another and start to think back to the day when they were split apart. Sai holds Virat responsible, saying that he should have looked after her and helped her start a new life. She directs her accusations on Vinayak, who in turn asks her about Savi while making the same accusations against her.

The latter responds that she is her own kid, but Virat refuses to believe that and asks for her father’s name instead. The latter says that she is her own child. In the following, Sai will recollect how she said her name, her father’s name, as well as her mother’s name, and she will tell Virat the same response. He claims that she has moved on with her life without considering him or their relationship in any way. He asks her why she didn’t contact him or notify him that she was alive, and she responds by asking why he didn’t come to find her near the accident site.

He questions her for not calling him or informing him that she was alive. Virat yells at Sai and tells her that he had made a lot of efforts to locate both her and their son Vinayak, but that he was saddened to learn that they had both passed away. While he claims that he has seen their names on the death list, she insists that he is not telling the truth. She makes fun of the fact that he is married to another woman and has children with her. In addition to this, she reprimands him for calling the youngster Vinayak, despite the fact that he had just asked her the same thing about Savi’s name.

In addition to this, Virat and Vinayak were getting ready to depart when they were ambushed by Gulabrao’s henchmen. They hit Virat while everyone around them was stunned, and Sai offered assistance to him. They immediately began pounding the thugs, and then, all of a sudden, one of them removed Savi from the area. While everything is going on, Mohit visits Pakhi in her room and expresses his appreciation to her for putting her faith in him when no one else did. She inspires him, and then she travels along with them when they leave.