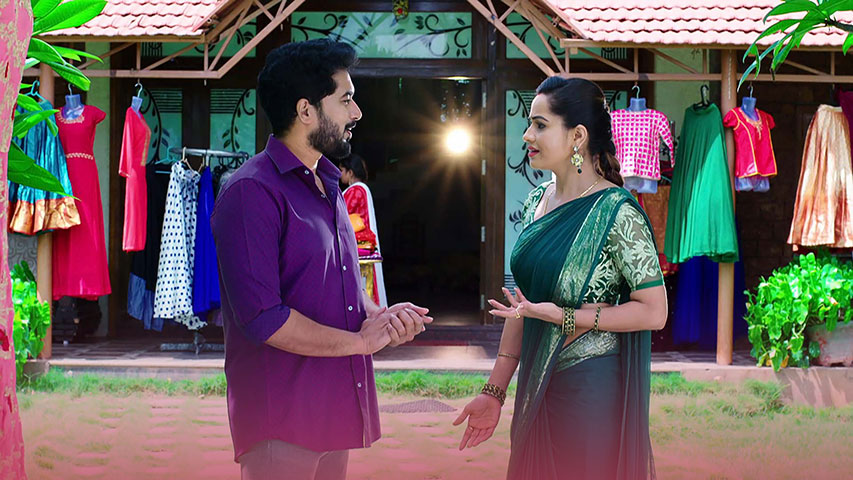 When Soundarya sees Mounitha at the restaurant, she confronts her. Later, when Karthik informs Mounitha about his choice, she disagrees with him.

Mounitha enters the restaurant to begin the episode. Karthik, according to her, appeared irritated with her for the first time in the past 30 days. She intends to have complete control over Karthik. To ease her headache, she makes the decision to drink strong coffee.

Hima is asked by Soundarya to sip juice. Soundarya is shown Mounitha by Hima after she sees her. Soundarya ponders her purpose for being here. If they attacked me and reached Karthik, he would remember the past and make the decision to handle them well, according to Mounitha, who believes Deepa might tell them.

She approaches them and inquires about their well-being and motives for visiting. It seems pointless to Soundarya to inform her of Sourya. She claims that they came to see the location. Mounitha seems at ease.

Why does she look boring, she queries Hima. Hima claims to be experiencing a headache. The waitress is instructed by Mounitha to bring the needed medication. Karthik’s call gets terminated by her.

Hima is sent by Mounitha to wash her face. Mounitha is asked by Soundarya if she is married. Says Mounitha, “No. ” Why did you switch to a colourful saree when Soundarya said you were wearing a white one?

Mounitha advises avoiding unpleasant recollections and begs them to stop questioning her since she lives in denial of her suffering. Karthik’s call is received by Mounitha. She thinks it’s not a good idea to end the call again, so she hangs up and asks them to be careful. Upon observing Mounitha’s actions, Soundarya and Anandrao became sceptical.

Deepa muses over the possible reactions of Doctor Baby upon seeing Mounitha. She plans to rapidly learn the location of Doctor Babu’s residence. Deepa is asked by her doctor brother what she is thinking. She informs him that Mounitha is involved.

She is told not to worry because there is nothing she can do. She begs him to force her to find employment, claiming that she is useless while lounging around at home. Waiting for Mounitha is Karthik. When Mounitha comes back to the store, she decides to keep Karthik away from his family.

Karthik questions her about why she didn’t answer his calls. He expresses his annoyance. He is offered an apology, and Mounitha requests that he tell her what he wants to say. Karthik suggests that we relocate to Hyderabad.

Mounitha is surprised and asks him why. Karthik claims that they may make more money and have more freedom in Hyderabad. Karthik is told by Mounitha that the pollution in Hyderabad is detrimental for his health, and she disagrees. Mounitha makes the decision that she must devise a strategy to isolate Deepa.

Mounitha departs. Karthik questions the necessity to travel to Hyderabad since carrying a mask may be sufficient in the event of pollution. Chandramma and Sourya discuss their new home. Chandramma also discusses their previous home.

Sourya claims that because you folks have resolved to stop pickpocketing, this residence is preferable to the previous one. Brings Auto is Indrudu. If he purchased a car, Sourya inquires. According to Indrudu, he brought it to rent.

In the back of the car, Sourya queries if he printed what she asked. As per Indrudu, he did. Sourya walks up behind the car. The words “Dad and Mom where are you.” are inscribed on the car. If her parents saw this, Sourya claims, they would recognise her. Chandramma and Indrudu speculate that Sourya’s parents might still be alive. Deepa considers ways to win back Karthik.

She makes the decision that she must force Karthik to recall who she is. Karthik will then handle everything at that point.

Precap: When Deepa tries to approach Karthik, she will see him. He rides out in an automobile. Karthik is followed by Deepa in a car. Karthik is getting upset when Deepa notices him and goes to chat to him. Karthik acts as if he is unfamiliar with her. Karthik is asked by Mounitha who he is speaking to. Deepa is seen by Mounitha.