Get the written update for the brand-new chapter of the stimulating TV serial Pandya Store telecasted on Thursday, 01 September 2022 on Star Maa. Rishita Faces Suman’s Wrath is the name of the all-new episode number S1 E507. 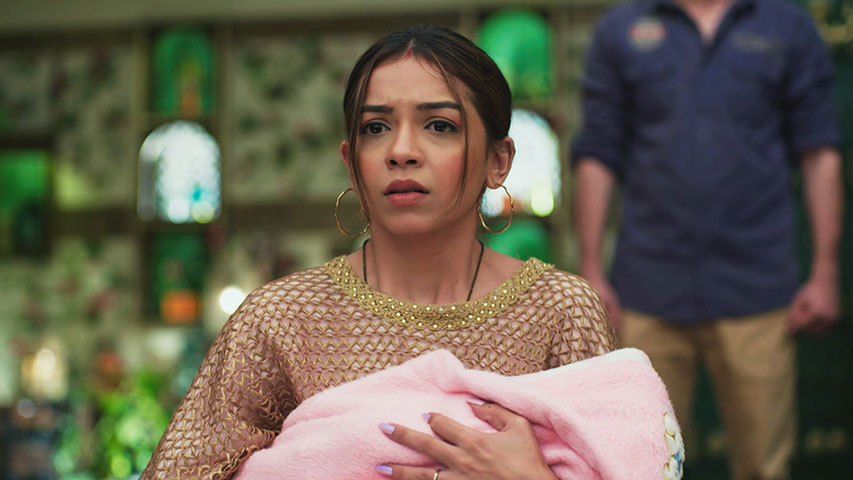 Rishita’s haughty defiance in the face of the Pandya’s rites causes Suman’s irritation to rise. Rishita will later query Shweta’s aim, and Shweta will provide an appropriate response to Rishita’s inquiry.

To demonstrate that she is incapable of parenting Chikhu, Shweta begins the episode by pretending to pass out while holding Chikhu. The sight of this shocks the Pandyas. Chikhu is quickly taken from Shweta’s hand by Krish. Shweta is helped to sit down by Dhara and Raavi.

Chikhu is taken from Krish by Dhara. Raavi offers Shweta water and inquires as to what transpired. Shweta makes up for the fact that she often has panic attacks. Krish reprimands Shweta.

He tells Dhara to give Chikhu to Shweta after she has learned how to care for the baby. According to Krish, Chikhu is so adored by Dhara that he is unable to watch her in sorrow. He departs. Shweta begins to move.

She claims that since she was raised in affluence, she is incapable of managing a home or a baby. She claims that despite having a nice mother like Dhara as her mother, she is unsure of whether Chikhu would be content with her in the future. She asks Suman to transform her into Dhara. Suman concurs.

It cannot be completed in 10 days, according to Shweta, who requests that she give it one or two months. Rishita and Dev travel to the godown at another location. Dev claims that the rent for the godown is beyond their means. When Raavi can purchase the items she wants, Rishita questions why there are limitations.

She is unwavering in her desire to use that godown for her company. She begins to sob. Dev consents to speak with Suman. Shweta encourages Suman to do an oil massage on her feet after they return to the Pandyas’ home.

Suman declines. Suman enquires about Chutki. Rishita and Dev got home just then. Rishita is questioned by Suman as to why she brings Chutki outside rather than keeping her at home.

Rishita claims that since Chikhu is keeping everyone here busy, she left her at her parents’ place. Chutki’s absence from the house for 40 days without permission was violated, and Suman reprimands Rishita for doing so. Rishita counters that today’s women begin working right away after giving birth. She continues, saying that starting her new company would take a lot of labour.

Suman advises them to make a pooja before bringing the infant outside. Such rituals are rejected by Rishita, who asserts that her job serves as her form of worship. Suman queries why she can’t hold off for a month. According to her, Rishita is worried because she is envious of Raavi.

Rishita used to work even before Raavi; therefore, according to Dhara, she has no cause to be resentful of anybody in the family. Although Rishita claims she is not envious of Raavi, she is not inferior to anybody. She asserts that she can manage both her job and her infant. Shweta chuckles.

She is reprimanded by Suman and told to concentrate on Chikhu. Raavi and Dhara make an effort to persuade Suman to let it go. They have issues, according to Rishita, when it involves her. She claims that she also favoured buying Raavi a vehicle.

When Raavi is going to pay for the automobile, Suman wonders why she loved it. Raavi, according to Rishita, has never travelled and has no experience with cars, so she ordered a vehicle that would be delivered the next day. Suman is asked to cover the cost of the godown and the automobile. Raavi appreciates Rishita picking out an automobile for her.

She claims to have already selected a vehicle. She shows her happiness at having used her money to purchase their fast automobile. Rishita interprets it as an insult and dares them to purchase a bus after the launch of her company. Rishita is reminded by Suman that she is providing a loan for both her company and Raavi’s vehicle.

She instructs Dev to draw up a loan agreement similar to one found at a bank and issues a warning about paying the interest amount when it is due. crying Chikhu Dhara requests that Shweta manage Chikhu on her own. The Pandyas prepare for the opening ceremony and pick up the automobile the next morning. Dhara purchases clothing for Chutki and Chikhu.

Rishita does not force Chutki to wear Dhara’s middle-class attire. On such a wonderful day, Suman reminds Rishita that they are all middle class. Chutki must wear the clothing that Rishita has picked, according to her. Shweta requests Chikhu’s garment from Dhara and applauds her decision.

Shweta is made fun of by Rishita for not trying harder to get along with Chikhu. She goes on to declare that if it were up to her, she would sacrifice everything for her child in an effort to come to prefer her over Dhara. Rishita is fortunate to have such a family and Dhara, who would look after even an unidentified kid, according to Shweta. Rishita is taking Dhara for granted, according to Shweta.

She claims Chutki is fortunate to have such a devoted family. She claims that since her parents used to be preoccupied with work and parties, she made a mistaken judgement and was dumped. Dhara takes the scissors to cut the ribbon in Raavi’s automobile and Rishita’s godown. No one, according to Rishita, obtained kalash for her.

Rishita receives the kalash Raavi purchased for herself. Raavi is considered to be the weakest member of the household, so Shweta chooses to use her to escape.