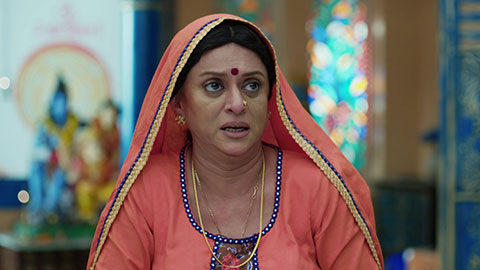 In the opening scene of the episode, Suman confronts Raavi while she is entering the home from the backyard. She inquires as to her origin. Raavi questioned how Suman learned about this. She tells Suman a falsehood about being in the hallway and having just arrived there.

Raavi asks Rishita if she has come to check the backyard camera in an attempt to assist her, and Rishita replies that they have installed cameras in the home, but in vain. Suman queries Raavi once again about her origins. Raavi claims that she met Shiva for chaat. Suman inquires as to the veracity of her reason for leaving the backyard.

Raavi is lying, and Rishita knows it. Shiva appears just then and starts to yell at Raavi. , but he refuses to comprehend and claims to be coming from the shop. Raavi informs Shiva that he invited her over to Arnav’s house for chaat.

Yes, Shiva nods. He requests that Raavi assist Dhara in serving lunch since he claims to be hungry. Suman queries. How is he still hungry after eating chaat?

According to Shiva, chaat is a light meal. He takes Raavi and departs. Rishita goes as well. Suman starts to get uneasy and makes the decision to watch Shiva and Raavi.

Rishita informs the family that cameras have been installed in their home. Gautam and Dev are grateful for Rishita’s attempts to recover. Rishita claims she neglected to take her medication. Dhara promises Rishita that she will note which medications and when to take them on the calendar.

Suman attempts to remind her family that the next day is her birthday but becomes frustrated when they fail to do so. Suman is disappointed that her family has forgotten her birthday and decides not to remind them while Rishita is showing the family the recording of each person’s room. When Shweta notices this, she returns to her room. She stands in front of the CCTV camera and purposefully changes her attire.

The family is shown the tape from Shweta’s chamber by Rishita. They all turn to look at Shweta as she changes her clothing. Rishita expresses regret. Raavi requests that Rishita warn them before giving the individual his or her chamber.

Suman chastises Rishita as well. Afterwards, she apologises once again and claims that she didn’t mean to expose Shweta changing clothes. The latter shows up and makes a big deal out of this. Shweta could have changed clothing in the restroom, according to Dhara, who claims that they were aware of the cameras.

As Rishita is her family, Dhara, according to Shweta, supports her. Raavi notes that while they are acknowledging their error, Shweta should exercise caution. Suman concurs with her daughters-in-law and instructs Shweta to dress in the restroom. While Shweta is upset that there was no confrontation, Rishita is appreciative that her family understands her.

When Shweta’s mother calls, she begs Dhara to take care of Chiku. Yet Dhara declines. She feels as if she ought to sever her relationship with Chiku. She asks Shweta to bring Chiku with her so she may answer the call.

She advises Shweta to have the ability to manage Chiku in any circumstance since there are only 10 days left. She tells Shweta to concentrate on Chiku and adds that Rishita and Chutki are now her top priorities. This news makes Rishita pleased, but it surprises Shweta. Dhara instructs Shweta to keep Chiku away from them for the next ten days in order for Chiku to forget about them.

Dhara and Suman concur. Chiku follows Shweta as she steps aside to take the call. The relatives embrace Dhara. They believe her to be insane, but Dhara claims that she has a very sharp mind.

She requests that they eat. Suman eats improperly. She exits after claiming that her mood is wrong. Dhara questions what is upsetting Suman.

The Pandya brothers both claim to be aware. Shweta and her pal are on call. The latter instructs Shweta to stage Chiku’s abduction in order to show that Chiku is not secure with her. The Pandya brothers inform the women that Suman’s birthday is the next day.

Gautam tells them they have a surprise and puja planned for her and wants them to act as though they are unaware of her birthday. They are eagerly anticipating Suman’s birthday celebration. When Shweta learns this, she fears that Chiku will be abducted when they are having Suman’s birthday festivities. The Pandyas are debating who will watch after Suman and take her out while the family gets ready for the unexpected birthday celebration.