For Suman’s birthday, the Pandya family orchestrates a pleasant surprise and strives to make the occasion unforgettable. In the meanwhile, Shweta puts her ingenious plan into action. 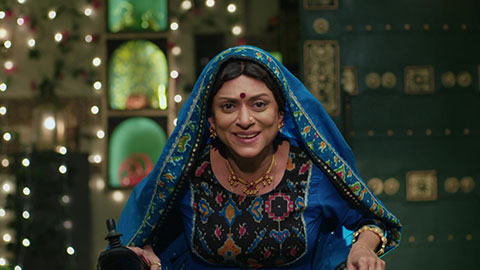 Learn the written update for the newly released installment of the stimulating TV broadcast Pandya Store telecasted on Monday, 12th September 2022. Suman’s Sweet 60th Birthday is the subtitle of the another episode number S1 E516.

Rishita warns Shweta at the beginning of the episode not to take advantage of Dhara’s affection for Chiku. Shweta apologizes. By claiming that Chutki needs her, Rishita drags Dhara along with her. Raavi is concerned that Arnav isn’t returning her call and that her modified photographs haven’t been removed from social media.

She worries that the hacker will make a mistake once again. After celebrating Suman’s birthday, they shall see this, Shiva reassures her. According to Raavi, there is still an issue. All partygoers are linked to her on social media, she tells Shiva, and Kanta’s daughter-in-law would undoubtedly question her.

In her words, she doesn’t want any fights to break out during Suman’s celebration. She hides her identity by donning a mask. Shiva inspires Raavi. He claims that because individuals have a history of blaming others, she doesn’t need to respond to their inquiries.

If they question her, he promises to answer. He persuades her to take her mask off. Raavi agrees. Kanta is with Suman.

Suman criticizes her family’s lack of concern for her. Since the morning, she has been at her home. They haven’t called her; they haven’t even bothered to come to look for her. She claims Kanta provided her with lunch to eat.

Kanta believes Dhara fed Suman lunch. Suman declares that she will check into a nursing home. Pandyas are concerned about Suman’s whereabouts in the meanwhile. Here, Kanta persuades Suman to return home before calling Dhara to let her know.

Krish brings the cake. According to Shweta, this cake will lead to Chiku’s abduction and her release. Dhara is getting ready to leave with Suman. Suman shows up just then.

The family hides and extinguishes the lights. Suman is perplexed as to why the home is dark. Lights return abruptly, and Pandyas exclaim in surprise. They dance while wishing you a happy birthday.

Suman is ecstatic. Taking advantage of the situation, Shweta injects sedatives into the cake. Suman is asked by Shiva how their surprise went. Suman believes that she was unsuccessful in discovering their wonder, but she plays along as if she saw Dhara and Raavi at the temple the morning they were supposed to be surprised.

According to Kanta, Suman was sobbing at the temple and wished to go to an older adult’s home. Hearing this shocks the family. Everyone expresses how important Suman is to the family and them personally. They apologize to them.

Suman expresses regret to them for his lack of confidence in them and desires to enter a nursing home. They embrace together. Shweta considers carrying out her idea. Suman describes to everyone how she and her husband spent their first birthday together after marriage.

The Pandyas celebrate Suman’s delicious 60th birthday. Dhara lights the cake’s candle. Suman wishes you a happy birthday. She hopes for the betterment of her kids.

Shweta believes that after they consume the cake, her plan will begin, and she will be liberated from Chiku and Pandya’s family.