The Pandyas are beginning to respond favorably to Shweta’s tactics. Raavi, unfazed, goes to meet Arnab for the photographs before she realizes what caused all of the commotion. 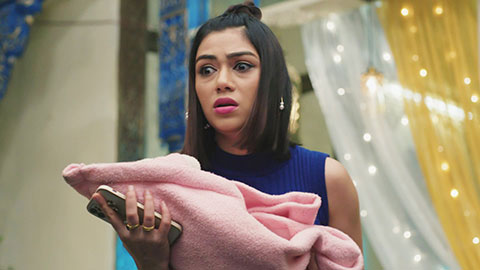 Explore the written update for the brand-new installment of the fascinating telecast Pandya Store released on Tuesday, 13th September 2022. Shweta Executes Her Plan is the label of the cool episode number S1 E517.

Suman receives a gold chain as the episode’s opening gift from the Pandyas. The latter queries if they had used funds from her locker to purchase it. Gautam reassures Suman that they paid for it jointly out of their funds. Suman is overjoyed.

She must wear it, per Gautam. Dhara requests that Shweta give the cake to each visitor. Shweta is their guest, and Rishita tells Dhara that she will be leaving their home shortly. She shares out the cake.

Raavi gets shocked when there Arnab comes. She fears that she will get into trouble if her family sees him. To discuss, she brings him outdoors. Raavi is gone, so Shiva sets out to locate her.

Raavi informs Arnab that her family is unaware she is receiving his assistance. She tells him to go and says they can chat the following day. Shweta’s acquaintance, who is posing as a dancer, performs inside the home. Pandyas accompany them.

Raavi and Arnab are conversing while Shiva exits the house. Pandyas, on the other hand, start to feel lightheaded. They swoon. Arnab informs Raavi that they may meet the next day to have lunch and breakfast.

Shiva has lightheadedness and faints. Chiku is given to Shweta’s buddy. After leaving, her companion carries Chiku behind her. Raavi misses them since she is engaged in conversation with Arnab.

The car carrying Shweta’s companion is headed that way. Shweta tells her buddy over the phone that everything Chiku needs is set up at the farm home. She continues by saying that Chiku had food in her bag. She reminds her that Dhara won’t be there and asserts that she can’t put Chiku’s health at risk since he is her kid.

Before Pandyas awakens, she hopes her companion will make it out of the city. When Shweta hears Chutki sobbing, she realizes she has forgotten about her. She cuts off the call. She makes an effort to soothe Chutki.

Shiva is found unconscious by Raavi. She questions why Shiva is at this place. She attempts to awaken him. When Shiva doesn’t wake up, she becomes concerned about him.

Raavi didn’t pass out, which caused Shweta to worry that her plot would be foiled. She puts Chutki on the ground while acting weak. Raavi enters the home after hearing Chutki screaming and is horrified to see the whole family comatose. She attempts to get everyone awake.

She is a fool, in Shweta’s opinion, for missing Raavi. Later discovers Chiku is disappeared. A five-month-old infant is gone, she tells the cops, and her family members are comatose. She then claims that a few days before, someone had hacked into her social media account, and they had reported it to the cyber cell.

She doesn’t believe the hacker knew about this and targeted her family. The inspector assures Raavi that they will arrive and warn the checkpoints to prevent the kidnappers from escaping. Shweta texts her buddy to let her know about the situation. Raavi shouts out while attempting to awaken everyone.

Again, Arnab appears. He makes an effort to comfort Raavi. There are police there. Raavi is told by the inspector not to be concerned since a doctor and an ambulance has already arrived.

He requests a picture of Chiku. He receives it from Raavi. Raavi is awaking Shiva. When he awakens, she hugs him and tells him she loves him.

Raavi is asked by the doctor what transpired. They were commemorating Suman’s birthday, according to Raavi. She spent some time outside. When she returned, they were asleep.

The doctor explains that they must all be brought to awareness before taking their blood samples. Shweta is concerned that her blood won’t test positive for narcotics.