When Krish intervenes to prevent Shweta from becoming drunk, she eventually breaks down and confides in him. Elsewhere, Dhara is coping with her broken heart while making preparations to remain in this place without Chikoo. 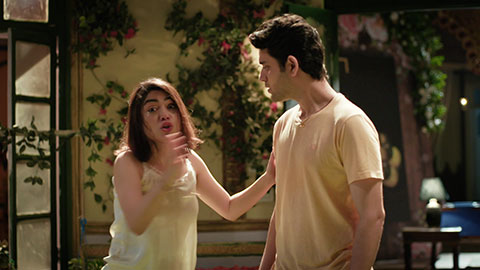 Let’s experience the written update for the most recently published sequence of the stirring TV drama Pandya Store aired on Monday, 19th September 2022. Shweta Shares Her Feelings is the label of the most modern episode number S1 E522.

Shweta paces frantically on the terrace at the beginning of the episode, recalling Suman’s choice and fearing that she would stay free longer if she went back to her parents’ home. She kicks over the boxes on the table. When Krish hears this disturbance, he awakens and believes that someone has broken into the home. In the meantime, Dhara is spending time with Chiku.

She questions how she might persuade her heart to remain without Chiku. Shweta discovers a bottle of alcohol in the box on the patio. She begins to sip it. Krish gets there to see whether a thief has entered the home.

He observes Shweta sipping booze from Gautam’s bottle. He prevents Shweta from finishing the bottle and discards it. Krish’s refusal to allow Shweta to consume alcohol causes her to react aggressively. She started crying after that.

She begins to moan about how unhappy she is. She claims that the guy she eloped with dumped her. She claims that she desired a carefree life and a lover but was instead given a child who interferes with her independence. Shweta claims that she was given the child even though she didn’t want him, unlike Dhara, who yearned for a child.

She sobs loudly. Rishita is considering Shweta. Dev enters the space. He declares his admiration for Rishita’s management of Dhara and the family.

He gives her a cheek kiss and declares his love for her. Rishita confides in Dev her concerns regarding Shweta. As Shweta prepares to leave the home, Dev advises that she be forgotten. Rishita claims that she’s playing a huge game and isn’t persuaded.

Rishita is accused by Dev of being egotistical and of celebrating Chiku’s leaving because she sees him as a rival to Chutki. Rishita disputes it and claims he is unable to comprehend her viewpoint. Dev expresses concern about Dhara’s potential heartbreak and worries about how she will react to Chiku’s leaving. When Shiva imagines Raavi and Arnav together, he becomes envious.

Raavi enters the space. She claims it’s a good thing Chiku was discovered because if not, she would have taken responsibility for kidnapping Chiku. She thanks Arnab for helping her discover Chiku and wants to ask him to lunch. Shiva tells Raavi to go to sleep after reacting furiously to her.

Raavi is perplexed by Shiva’s unexpected rage. Shweta is being comforted by Krish. The latter claims that Krish is unable to comprehend her circumstances. She queries his knowledge of everything she did to get rid of Chiku.

However, Rishita calls the police station and informs the inspector that the girl who abducted Chiku is named Forum and requests that he look into this. He concurs. Krish now questions Shweta about her actions. Shweta is going to admit that she was responsible for kidnapping Chiku.

Krish then observes Dhara and Chiku making their way to the terrace. He shuts Shweta’s lips and hides with her. Raavi tries to convince Shiva that she wants to take Arnab out to supper since he was instrumental in getting her account back. Raavi irritates Shiva by continuing to bring up Arnab.

They disagreed about Arnab. Dhara uses Chiku’s hand to pot a plant. After that, Shweta departs. Krish hears Dhara say that the pot would always make her think of Chiku and that she would miss him once he leaves.

Dhara is seated next to Krish. He sobs and embraces her, claiming to be her kid and vowing never to leave her side. She gives Chiku to Krish and asks him to give it to Shweta because she fears that if she spends any more time with him, she won’t be able to separate herself from him. Shweta can recall everything that happened, from her accident to her parents’ desire for her to retain Chiku.

She forfeits her independence by refusing to return to her parents’ home. She then chooses to go. Just then, Krish and Chiku show up.