At twelve o’clock in the morning, Shweta makes an effort to flee the Pandya mansion. But Krish is courageous enough to bring up a proposition in front of her, which causes everyone else in the room to be surprised. 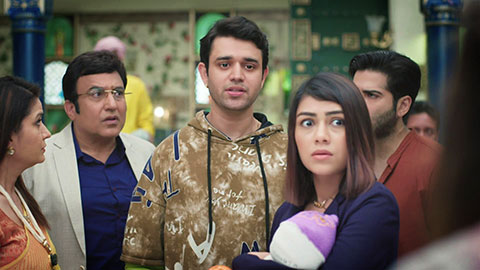 Get the written update for the current episode of the interesting show Pandya Store brought on Tuesday, 20th September 2022. Krish to Take Responsibility is the designation of the freshest episode number S1 E523.

The episode begins with Shweta attempting to flee the Pandya residence. Krish’s presence with Chiku, however, derailed her plot. Shweta inquires as to why Chiku is not with Dhara. Krish believes he cannot leave Chiku with an intoxicated Shweta. Krish expresses his desire to have Chiku with him for the night since he is going the following day.

Krish requests Chiku’s blanket. Shweta hands it over to him. Krish departs. Shweta abandons her intention to flee because she does not want to seem inadequate in the sight of the Pandyas. Raavi is on the call with Arnab in the morning.

She claims she won’t be able to see him that day since it is Chiku’s final day at the Pandyas’ place. Shweta and Chiku make their way downstairs. Dhara looks downcast at Chiku. Suman has sympathy for Dhara. Rishita suggests she go to the police station after getting Saachi’s vaccine.

Dev says he’ll travel to both locations and begs Rishita to remain at home. Shweta believes Rishita is constantly behind her. She should erase anything Forum-related from her phone. Chiku sobs. Shweta is unable to soothe him.

Dhara offers Chiku a bag containing Chiku’s clothing and toys, which Shweta had forgotten to pack. She requests that Shweta properly hold Chiku. Rishita and Suman advise Dhara to disregard Chiku since he is Shweta’s duty. Dhara provides a list of medications for Chiku. Gautam searches the room for his wallet in the cupboard and discovers Chiku’s handprints.

She sobs uncontrollably. Shweta asks Suman to allow her to remain at her home for a few days longer. Rishita believes Shweta should be relieved to be able to return to her vast mansion, where her only responsibility is to care for Chiku. Shweta’s parents greet Suman. They force her to wear a garland.

Suman is shocked that they purchased chocolates and flowers to express their gratitude. Shweta’s mother questions Suman about why she wants to send Shaweta back after sending them a marriage proposal for Shweta. Pandyas are perplexed. Suman inquires about Shweta’s marriage and with whom she is married. Just then, Krish appears and talks with him.

The Pandyas are taken aback. Rishita chastises Krish and invites him to marry Shweta. Krish says yes and inquires about the issue. Krish, according to Rishita, is not ready for any responsibility since he is still studying. Rishita requests that Suman explain things to Krish.

Shweta believes Rishita is correct. She claims that she has just gotten out of a toxic relationship and is not prepared for it. Krish, she claims, wants to marry her out of sympathy. She refuses to ruin someone else’s life to build her own. Krish claims to have sentiments for Shweta that are not based on compassion.

Gautam calms down Suman. He believes Krish should have spoken with his family before making such a significant choice. Krish tells Shweta that they have their whole lives to get to know one another. Rishita attempts to persuade Krish that marriage is not a game but a serious commitment. Shweta’s mother claims that Krish is not a kid and that he must have carefully considered his choice to marry Shweta.

She compliments Krish and Suman on their parenting. Krish claims that Dhara raised him. Dhara remembers her breakdown in front of Krish and wonders whether Krish wants to marry Shweta for her sake. Krish removes Chiku from Shweta’s grasp and delivers it to Dhara. Krish says Chiku may remain in this residence for a few days longer.

He tells Shweta’s family that he would accept Shweta’s choice to marry him. Shweta and her parents are on their way out. Suman confronts Krish. She questions Krish’s decision to marry Shweta, a mother of a kid. Suman is sure that this marriage will not take place since Krish does not respond.

Rishita claims that the issue isn’t that Shweta is a mother but that Shweta isn’t a decent girl. She gives her terrible vibrations. Raavi inquires of Rishita as to what is wrong with Shweta. She believes that if Krish loves Shweta, they should support him. Dhara approaches Krish and asks him if he wants to marry Shweta for her sake. The family is taken aback.