As his anxiety levels rise, Krish makes the rash decision to wed Shweta at the temple, against Suman’s objections. When Shweta had an accident later on, the Pandyas get concerned about her well-being. 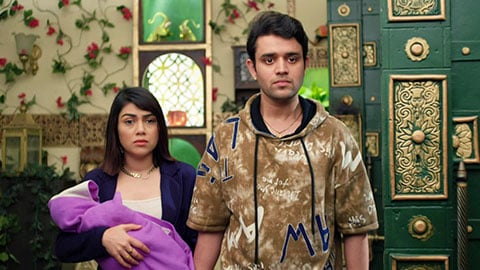 Explore the written update for the sweet episode of the nice television broadcast Pandya Store released on Friday, 23rd September 2022. Krish’s Shocking Decision is the name of the original episode number S1 E526.

The episode begins with Krish stopping Shweta and asking whether she wants to marry her and if she would not regret her choice. Shweta responds that she will not. As a result, Krish proclaims that they do not need anyone’s consent since they are adults. He promises they will marry in the temple with her parents’ approval. Krish’s choice astounded everyone.

Shweta hopes Suman puts a stop to Krish. Suman addresses Krish. She claims she would never allow him to marry Shweta. If Krish marries Shweta, she threatens to kick him out of the home and break all relations with him. Suman has three other sons and daughters-in-law to care for him, but Shweta is raising a fatherless kid on her alone, so Krish wants to help her.

He says that after marrying Shweta, he would return to obtain her blessing and reside there. He tells Suman that she used to despise Rishita but that she is now her favorite. He claims that Shweta will find a space in her heart and that she will adore her. He requests that Suman give Shweta a chance. Suman states that she has no relationship with Krish.

She smacks him across the face with her stick. The Pandyas stop Suman. The latter drops the staff as he becomes exhausted. Suman claims that Krish’s choice breaks her heart. She asks him to accompany Shweta out of the home.

Krish informs Shweta that Suman has consented. He tells Shweta not to be afraid of Suman’s wrath since it is her way of blessing them. Krish starts to walk away, clutching Shweta’s hand. Shweta lets go of Krish’s hand. Despite Suman’s pleas, she refuses to marry Krish.

Dhara tells Suman that Shweta values her remarks. She says Krish’s decision is correct and asks her to agree. Shweta hands Chiku over to her mother, explaining that she does not want to marry Krish against his family’s wishes. She tries and fails to persuade Suman. She claims that she was unlucky to be this family’s daughter-in-law.

Krish believes he must persuade Shweta to marry him for Dhara’s sake. Krish appeals to Shweta, but she walks away. Shweta goes away, silently thanking God for sparing her from the wedding. Inside, Krish tells Suman that she has shown that she is uninterested in him. A vehicle then strikes Shweta, causing her to pass out.

Hearing Shweta’s cry, the Pandyas and Patels rush out. They are astounded to see Shweta unconscious on the road. They bring her inside and look after her. Shweta’s mother blames Suman for her daughter’s accident. She chastises Suman for refusing to accept an unmarried mother as her daughter-in-law.

On the other hand, Shweta’s mother prepares to depart, taking Shweta with her. Suman unexpectedly stops Shweta while holding her hand. Suman claims she just requested Shweta to leave home and not the globe. She claims that she believes she can keep Krish pleased. Suman’s choice astounds Shweta and Rishita, but the rest of the family is overjoyed and thanks, Suman.

Dhara celebrates by feeding sweets to everyone. Rishita will not eat sweets. Shweta’s mother wants to set the wedding date. Dhara says Suman knows a priest and that she will select the date. Shweta’s mother concurs.

Suman offers that Shweta and her parents relocate to a neighboring home to help with wedding preparations. Dhara claims that Hemant’s house is deserted. Suman says he’ll speak to them. Shweta is dissatisfied. Suman believes she would wait for Krish to express his desire to marry Shweta for Dhara.