Vidya’s suspicions are raised about Rani’s dancing at the Sangeet. Bubly argues that maybe she is attempting to forget her sadness by being joyful. Pavitra gives Dadaji a perplexed expression when she sees him in the picture frame. Pavitra believes she is Pishachini, murdered her parents, and is about to assault Rocky. When she touches Rani with the hand that bears the mark, she claims that Rani will change into Pishchini. Dadaji makes Pavitra feel bad after choosing not to fall for Rani’s ruse. 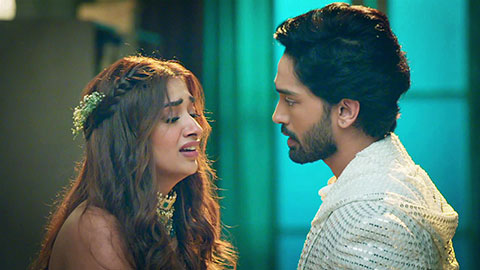 Get to read the written update for the brand-new episode of the pleasurable TV drama Pishachini released on Monday, 19th September 2022. A terrible awakening for Pavitra is the pseudonym of the ahead-of-the-game episode number E30.

Rocky asks Dadaji where he was and if he was okay at the beginning of the episode. Yes, Dadaji nods. Pavitra gives Dadaji a perplexed expression. Rocky gives Pavitra a look.

She wants him to accept that she really saw Dadaji in the picture frame. Rocky exits furiously. Rani’s dancing joyfully raises Vidya’s suspicions, and she informs Bubly that Rani doesn’t seem to be grieving the loss of her family. According to Bubly, maybe she is attempting to forget her sadness by being joyful.

Shikha suddenly joins Rani in the dance. Shikha’s family is shocked to see her smiling. Shikha’s mark isn’t visible, Vidya notes. Bubly argues that Shikha must have covered herself heavily with makeup.

Their dancing attracts the family. Dadaji is questioned by Pavitra about his exit from the photograph. On Facebook In order to free Dadaji from the picture frame, Pavitra departs. Along with Shikha, Amrita and Pratik come there.

According to Dadaji, he won’t let them transform any other family member into Pishach. He inquires about Shikha’s wellbeing. Laughing, Shikha admits that she was the one who had Pishachini over to their place. Dadaji promises to tell the family about them.

According to Shikha, they won’t let him go. Pratik advises Dadaji to join their cause. Dadaji claims that in order to restrain him, he should have requested a favour from them. Pratik reminds Dadaji that they assisted him in escaping the picture frame.

Dadaji seemed startled when told this. Pavitra questions Dadaji’s silence. Dadaji introduces himself as Pishach and changes. Pavitra is in disbelief.

Rocky is reflecting on Pavitra’s remarks. There goes Rani. Rocky is invited to the Sangeet by her. She should go, Rocky says, and he will join her later.

Rocky should explain what upset him to Rani, who observes that he is anxious. She queries if Pavitra isn’t to blame for his stress after seeing that they have both left the Sangeet. Rocky claims that Pavitra is spouting nonsense, and he agrees. He feels bad.

According to Rani, Pavitra believes that she is Pishachini. There, Dadaji begs Pavitra to join him in becoming a Pishach after telling her how happy he feels now that he is one. Dadaji makes Pavitra feel bad. She departs after choosing not to fall for Rani’s ruse.

Rani tells Rocky that Pavitra told Himani the same thing. She displays some emotion. She expresses sympathy for Pavitra, who believes she is Pishachini, murdered her parents, and is about to assault Rocky. Rani arrives just then and confronts Rani about turning Dadaji into Pishach.

Rocky asks Pavitra to stop talking gibberish as he stands in front of Rani. According to Pavitra, she will demonstrate that Rani is Pishachini. When she touches Rani with the hand that bears the mark, she claims that Rani will change into Pishachini. When Pavitra touched Rani, she recalled becoming her true form.

She feels uneasy. Rocky prevents Pavitra’s hand from reaching out to touch Rani. He requests that Pavitra return to London. Hearing this astounded Pavitra.

Rocky takes Rani from there. Watching this helplessly is Pavitra. Rani urges rocky to ignore Pavitra, and she also attempts to turn him against Pavitra. She asserts that only she can provide happiness, whereas Pavitra cannot.

In the meantime, Pavitra begs for assistance in front of God’s picture frame. In this passage, Rocky claims to be unable to stop thinking about Pavitra. Rocky may forget about Pavitra forever if Rani does magic in a juice glass and presents it to him.