Maddy converted an unknown girl into Rani and sent her in Rani’s place. Rani murders the girl by dressing her up in the clothes she wore when she was first captured, then utilising her magical abilities. She can sense footsteps approaching and hides the corpse under a bed. Sapna orders Pavitra to leave the home before daybreak and tells her she should never return. She requests that Rocky bring Rani into the home for her. 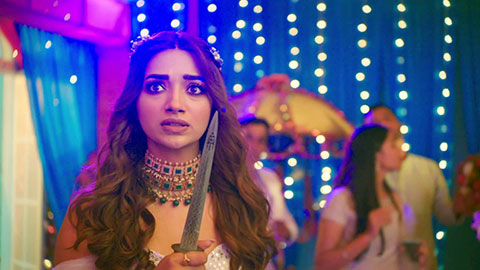 Learn the written update for the popular installment of the grateful serial Pishachini produced on Wednesday, 21st September 2022. Pavitra learns about Rani’s plans is the caption of the another episode number E32.

Rani begins the episode by explaining to Pavitra how Maddy saw the sacred dagger that Pavitra was holding and notified her. Rani continues by describing how Maddy converted an unknown girl into Rani and sent her in Rani’s place. An identical Facebook post is seen here. After hearing this, Pavitra is standing there in disbelief.

Rani claims that Pavitra would be held accountable for whatever happens to the girl if she passes away. Pavitra screams and flees away from the area while Rani and Pishach chuckle in the background. Rani overhears Dadaji telling another person that if she is rescued, she would be able to reveal the truth to her family. According to Pratik, if that female passes away, the family would assume that Rani passed away, and this will prevent Rani from marrying Rocky.

Rani suggests to them that because she has more expertise than they have, they should only watch the drama in order to gain knowledge. In the meanwhile, Pavitra is feeling guilty over stabbing a little girl who was uninvolved. She makes a call to the local police department. Rocky and his family go to the hospital, where they are informed by the doctor that the patient was rescued, but that she is still unconscious.

He grants them permission to observe the patient. The request to see Rani comes from Rocky’s family. While everything is going on, Rani shows up in front of the girl. She murders the girl by dressing her up in the clothes she wore when she was first captured, then utilising her magical abilities.

She can sense footsteps approaching. She then lays down on the bed and conceals the deceased girl’s corpse underneath it. When Rocky opened the door, he saw Rani standing there. Pavitra admits to the inspector that she stabbed another person, and she requests that he place her under custody.

At that same moment, Rocky and his family make their way there. Rocky maintains that there is no need for it. Rani reveals to the inspector that she was injured with a knife. She has been caught lying about it being an accident.

While she was dancing, she cut herself when she accidentally stepped on the knife. Pavitra felt responsible for the accident when she dropped the knife. The cops have dispersed. Both Sudhakar and Sapna are unforgiving against Pavitra for her role in Rani’s stabbing.

Sapna orders Pavitra to leave the home before daybreak and tells her she should never return. She requests that Rocky bring Rani into the home for her. Pavitra’s eyes well up with tears as she gazes at Rocky. Rani believes that he still has control over Rocky and that this will prevent Rocky from thinking about Pavitra.

Rani follows Rocky as they go inside the home. Pavitra’s eyes fill up with tears. Rocky makes his way back to Pavitra, abandoning Rani in the middle of the journey. He dabbed her eyes with a tissue.

Rani believes that the effects of her spell on Rocky are beginning to wear off. She shouts and acts as though she is in agony in order to catch Rocky’s attention and get him to help her. Rocky rushes up to Rani and inquires as to whether or not she is okay. Rani claims that whenever he is in the same room as her, her agony disappears.

Rani follows Rocky as they go inside the home. Both Pratik and Amrita make their way to Pavitra’s bedroom. They make fun of the fact that Rani was able to beat her. Amrita believes that Rocky has completely forgotten about Pavitra.

According to Pratik, Rani had already cast a spell on Rocky and had him under her control before he arrived. He is ready to reveal what Rani intends to do to Rocky after the wedding the next day between the two of them. Amrita interrupts him and implores him to keep the information to himself. They make fun of Pavitra while laughing.

Pratik and Amrita watch as Pavitra demonstrates Hanuman’s picture frame to them. They experience fear, which causes them to retreat. Pavitra shuts the door behind her. Pavitra is curious about the details surrounding Rocky and Rani’s wedding, namely what will go place the next day.

Pavitra and Rocky are each alone in their rooms, yet they can’t help but think about one another. Rocky shatters his phone in a fit of rage. Pavitra pulls out her phone in an attempt to get in touch with Rocky, but she quickly replaces it. Rocky arrives to Pavitra’s room.

He is hesitant to rap on the front door as he stands there on the threshold. During this time, Pavitra offers a prayer to God. She claims that she does not know anybody else to whom she might provide the information of Rocky and Rani’s wedding secret. She claims that not a single person in the house will trust what she has to say.

She claims that her grandpa promised her that he would look out for her interests always. There’s a knock at the door from Rocky. Pavitra opens the door, but there is no one there to greet her. At that very moment, Rani strikes Pavitra from behind. Pavitra faints. Rani laughs.