A festive celebration known as a Jagrata is held in the residence of the Thakur family. When Rajjo’s life is under danger, Arjun’s greatest concerns are realised concerning the safety of the hostel where she is staying. 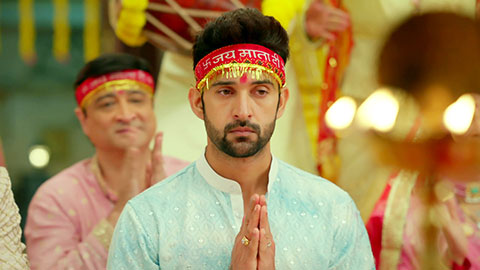 At the beginning of the episode, Arjun is shown getting ready for the puja. Suman warns him that Madhu is already upset with him and that he cannot afford to make another mistake since she is already upset with him. At the hostel, Rajjo keeps her fingers crossed that when Arjun calls, he may provide some new information on his mother. While Kavita and Manorama are in Puskar’s residence, Manorama tells Kavita that she will travel to Jagrata and pray to the Goddess to locate Rajjo. Kavita claims that her husband would get irritated with her if she did not complete all of her domestic chores before leaving the house.

She requests that Manorama take the family photo out of its frame and display it on the wall for her. Manorama obliges. Before Manorama can look at the family photo and see Puskar, Kavita yells to her. Pushkar sends a message to the warden requesting that he contact him after Rajjo has been eliminated. While all this is going on, Arjun is concerned about Rajjo.

Suddenly, the weather turned for the worse. Arjun believes that even God turned against Rajjo. At the motel, Rajjo says a prayer to the Goddess, asking for her assistance locating her mother. She notices a dish that is filled with a crimson-colored liquid. It is used to apply Alta to the soles of her feet by her.

On the other hand, Arjun performs the Alta technique on Madhu’s feet. Madhu extols Arjun’s virtues while subtly making fun of Chirag. Arjun tries to explain to Madhu that his relationship with Rajjo is honest, that she is only his duty, and that he must live up to this obligation. On the other hand, Madhu forbids Arjun from seeing Rajjo and tells him to quit worrying about her since the hostel is a secure place where she can be. The sound of a female muffling her voice may be heard from the locked room.

She relays the same information to the warden. The warden denies it and sends Rajjo to her room. Right then, Arjun dials the warden’s number to reprimand her because no one was available to take his call at the reception desk. The warden makes some explanations for him and reassures him that Rajjo has gotten used to living in the dorms. Arjun does not trust her and thus requests that she convince Rajjo to communicate with him through video conference.

The warden gave his consent, ensuring that Arjun would not be able to see Rajjo and throw off their well-laid plans. The warden informs Rajjo that Arjun is available for the call. Rajjo is beyond himself with happiness and rushes over to her. Arjun’s phone is taken away from him, and hangs up on the incoming call before Rajjo can say anything to Arjun. At this point, Rajjo starts to feel upset since Arjun’s call has been cut off.

The journey to the jagrata, led by Pushkar, is about to begin for Pushkar’s family. Kavita has informed us that their maid would accompany them to the jagrata in order to serve the guests there. Pushkar gives his consent, and Manorama takes her place at the vehicle’s rear. During this time, the Thakurs are participating in the Goddess Jagrata. The presence of Rajjo dominates Arjun’s mind.

Manorama and the rest of Pushkar’s family make it there. In order to ensure Rajjo’s well-being, Manorama prays to the Goddess. When Rajjo gets to the hostel, the warden tells her a lie, telling her that Arjun has contacted her on the telephone, and then she locks Rajjo in a very dark room. Rajjo is perplexed by the fact that there is no light in the room. The lights come on all of a sudden.

Rajjo is taken aback after seeing the makeshift hospital that is there. Arjun attempts to call the warden while in the Thakurs’ home, only to discover that her phone is off. He begins to feel uneasy. When Rajjo gets there, he is taken aback when he sees two guys enter the room. While the other attempts to sedate Rajjo by injection, the first of them manage to capture Rajjo.

At this point, Arjun is pleading with the Goddess to provide him with some kind of indication that Rajjo is doing well. After that, Rajjo kicks the guy before running out of the room and shutting it behind him. Arjun makes a call to the hostel. Madhu reprimands Arjun after being caught by her. Arjun asserts that Madhu is in the wrong while he is in the right in this situation.

During the pooja, Madhu requests that Arjun maintain silence and sit beside Urvashi. There, Rajjo throws a pot on the head of the warden and smashes it. She arrives in the lobby just in time. The landline is making a sound. She makes many attempts to take the call.

The guy apprehends Rajjo. Rajjo is heard yelling for assistance. The guy takes Rajjo to the room where her organs would be taken out of her body.