As Rajjo prepares to depart the Thakur home, Arjun offers her some solace. After some time has passed, Vicky’s erratic driving in the automobile causes Rajjo and Manorama to feel a growing sense of dread. 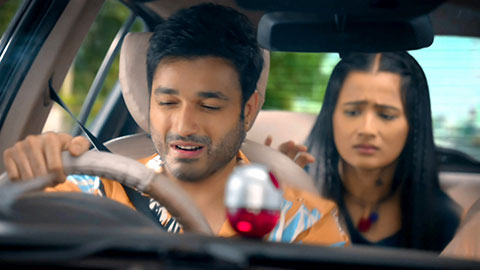 The episode begins with Madhu escorting Rajjo and Manorama to their front door. Arjun and Rajo exchange emotional glances. Arjun dashes at Rajjo. Arjun is prevented from approaching Rajjo by Madhu closing the door. Arjun afterward sits in his room.

When Rajjo enters his room from the balcony, he is taken aback. Arjun claims that he assumed she had departed without meeting him. Rajjo claims that if she did not meet him, she would die. Arjun chastises Rajjo for broaching the subject of death over such trivial matters. Rajjo says she will miss his reprimands.

Rajjo apologizes for her actions and thanks Arjun for all his favors. Arjun and Rajjo grow emotional. They complement each other’s traits and agree not to alter them. Rajjo gives her scarf to Arjun as a souvenir. She instructs Arjun to look for himself.

Arjun approaches Rajjo and asks whether she is willing to marry Vicky. Meanwhile, Manorama is curious about Rajjo’s whereabouts. She claims that she may have forgotten something. Manorama inquires about Vicky’s purchase of the automobile. Vicky claims that this is his friend’s vehicle.

Manorama then asks about the strange odor emanating from the car. Vicky claims it’s the odor of vehicle freshener. He eats paan, claims it’s popular here, and then spills it. In his jeans pocket, he has an alcohol bottle. Arjun tells Rajjo that he knows and senses that she is unhappy about marrying Vicky.

Rajjo claims that she clashed with her mother for the first time but that in the end, she would get what she wanted. Arjun inquires about Rajjo’s desires. He claims she wants to remain in Lucknow and work. Rajjo claims that her wants would be thwarted in the face of her mother’s demands since she loves her. She goes on to add that her mother suffered much from being alone.

She doesn’t want her to go through what she did; thus, she wants her to marry. She claims that she cannot be obstinate this time and must match. She does, however, pledge to do something to expose her to the rest of the world. She claims that her mother consented to remain in this city, and she will see this as a half-victory and will not give up. Arjun claims that Chirag just stored his phone number on the phone he provided her and invited her to contact him if she had any questions.

Rajjo cries as he embraces Arjun. Arjun returns her embrace. Rajjo informs Arjun that she is leaving. Arjun observes Rajjo driving away. He tells Rajjo that she must look for herself since he is not there.

He remembers Vicky’s offensive remark regarding Rajjo’s physique and suspects that Vicky isn’t the person he’s claiming to be. Arjun afterward rests his head on Madhu’s lap. Rajjo dominates his mind. Madhu inquires as to why he feels depressed. She claims she dislikes seeing him unhappy.

She tells him to be pleased since he is getting married shortly. She advises establishing a wedding guest list. Arjun leaves home, claiming they’ll talk about it later. Arjun overhears Rocky and his buddy discussing Vicky’s irresponsible driving. He leaves home because he is concerned about Rajjo.

Meanwhile, Rajjo and Manorama instruct Vicky to drive gently. But he keeps pushing too quickly, which terrifies Rajjo and Manorama. Arjun, on the other hand, is going around seeking Rajjo. He attempts to contact her, but her phone is not in service.