Sejal, together with Drishti and Shalini, looks through the puja materials in an effort to uncover something buried there that Veera may utilise for her scheme. Yohan calls Sejal asking her to reach the location safely in order to get the Ganesha idol. Sejal tries to contact Yohan, but she is unable to. Veera travels to the basement and removes the weapon for explosion inside the necklace. She claims that once it is ignited tomorrow at puja, the noxious fumes that will emanate from it would kill everyone in the room. 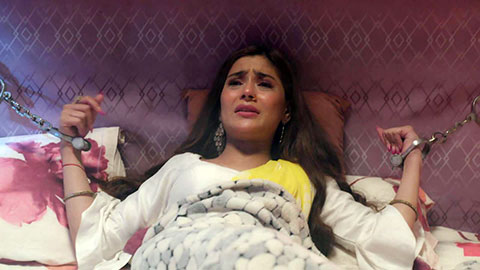 Check the written update for the another episode of the dulcet TV series Spy Bahu delivered on Wednesday, 21st September 2022. Ahana’s shady approach against Yohan is the label of the newly discovered episode number E136.

At the beginning of the episode, Sejal, together with Drishti and Shalini, looks through the puja materials in an effort to uncover something buried there that Veera may utilise for her scheme, but they are unsuccessful. Yohan attempts to phone Sejal, but because of the severe rain, he is unable to connect to the network. Instead, he leaves Sejal a voicemail informing her to reach the location safely in order to get the Ganesha idol. He inquires as to whether or not she discovered evidence against Veera.

Sejal gives Shalini the instructions for using the metal detector, which immediately begins to make a noise. Veera, who is nearby, inquires as to what the sound may be. Sejal tells herself that the sound was her alarm while in reality it is time for her medication. She is of the opinion that they cannot use the metal detector in Veera’s company since it would cause her to have second thoughts.

Shalini was able to eavesdrop on Veera’s conversation with another person and overhear her advising them to deliver the package in a manner that would leave no room for suspicion. She relays the same information to Sejal. Sejal has a conversation with Harsh, who tells her that Ahana has run away, and even her transmitter was discovered on the road. Sejal is shocked to hear this news.

He instructs Sejal to continue looking for evidence at home, and he and his colleagues will look for Ahana. Yohan gives Sejal a call and explains that his vehicle was broken, so he will spend the night at a motel and return in the morning with the idol. Sejal begs him to take care. When the priest delivers the necessary items for the puja, Sejal tricks him into giving her the items, and while she examines them, Veera approaches her and inquires about what she has discovered.

Sejal explains that she was only counting the necessary quantity of each ingredient. Veera believes that no one would be able to discover the location where she has concealed it. After some time has passed, Sejal receives a video call from Yohan, who is sick with a fever. He claims that his reservation at the hotel was cancelled, so he had to look for another option.

Sejal reveals to him that she has been experiencing some unease recently. Someone is at Yohan’s door, and they are knocking. The videocall is terminated for some reason. Sejal continues her efforts to contact Yohan, but she is unable to.

When Ahana visits Yohan in his room, she remembers how she bribed the waiter to give her soup that was laced with narcotics so that she would pass out. Yohan warns her to keep her far, but then he loses consciousness. Ahana said that she has been looking forward to today for a very long time. While Yohan is unconscious, she kisses him and puts scratches all over his body, and she moves closer to him while she does so.

Veera travels to the basement, where she ruminates on the means through which she concealed the weapon for explosion inside the necklace. She cracks up the beads and removes the potentially lethal camphor from inside it. She claims that once it is ignited tomorrow at puja, the noxious fumes that will emanate from it would kill everyone in the room. She refers to it as her masterstroke and believes that Sejal would never be able to decrypt it.

Everyone prepares themselves for the puja as they wait for Yohan to arrive with the murti. He goes there, and Sejal is the one who does the aarti there. While Yohan was changing his kurta, he became aware of the markings that were on his body and had a hazy recollection of Ahana. When Sejal arrives, she informs him that she was feeling anxious due to the fact that her mangalsutra had broken.

At the conclusion of the episode, Sejal notices a nail mark on Yohan’s hand and confronts him about it, but Yohan is unable to provide satisfactory explanations.