In order to improve her score on her tests, Naaz enrols in additional courses with her professor. However, Nehmat discovers that the professor is using her sister for his own gain, and she cautions him from causing Naaz any difficulty. Will Nehmat’s worry be taken into account by Naaz? 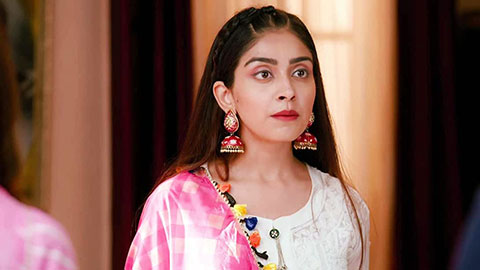 Get the written update for the popular installment of the provocative TV series Udaariyaan issued on Wednesday, 21st September 2022. Nehmat fires the professor is the tag of the freshest episode number E481.

At the beginning of the episode, Randawan has a bad feeling as he recalls the accident that Fateh-Tejo was in. On the other side, Nehmat views the films and photographs that Fateh-Tejo has taken. She sobs because she feels homesick for them. At Ekam’s residence, we see Ekam engaging in various physical activities. When Nehmat got back, he saw Rupy and Harman waiting for him.

Rupy inquires as to where she will be arriving from in the wee hours of the morning. Nehmat does not want to disclose this information and instead suggests that they read the piece she wrote for the school magazine. Rupy claims that much like Tejo, Nehmat is not capable of telling lies. When Mallika arrives at Ekam’s home, Ekam inquires as to the location of her origin. Mallika tells Ekam to question Nehmat about it.

At that that moment, they overhear their parents arguing. Mallika claims that they are engaged in conflict once again. She is interested in knowing what took place sixteen years ago. Ekam claims that he is unaware of the situation, and that his father does not want to comment. Nehmat encourages Naaz to check out the piece she wrote for the school magazine.

She is getting set to move out and attend college. She is told to wait by Naaz. Nehmat explains that she is running behind schedule and then departs. A grin appears on Naaz’s face as she shares the news that Nehmat is going to talk to Ekam. The Jeep that Nehmat and Ekam are traveling in has now left the parking lot.

Ekam inquires about Nehmat and Mallika’s whereabouts early in the morning by asking Nehmat where they went. Nehmat reveals that it is a secret and predicts that Ekam would be pleased with himself once he finds out the truth. Nehmat notices a young man driving dangerously fast in his automobile. Nehmat gives pursuit and immediately begins a struggle with the man he has captured. Ekam is holding Nehmat in an effort to get Nehmat to quit.

A Facebook post describes how Nehmat and Mallika placed waste in front of the home of a certain professor, and how they filmed the professor when he fell into the garbage they had scattered. After reading the article that Nehmat and Mallika wrote, Naaz’s buddy tells her that Nehmat is the reason why she didn’t have to deal with the intimidating professor. The wealthy student at Naaz’s school, Rony, is seen by Naaz extending an invitation to Nehmat to attend his birthday celebration. Nehmat has said that both she and her partner, Ekam, will be present at the celebration. Rony is of the same opinion.

Naaz makes an effort to engage Rony in conversation in the hopes of securing an invitation to Rony’s birthday celebration. However, he gets a phone call and leaves the room. A friend of Naaz’s had told her that Only Rony’s crew is invited to the party. Naaz makes up her mind that she will attend Rony’s celebration. Both Ekam and Nehmat talk about the article that Nehmat wrote regarding the professor.

Because of Nehmat’s boldness, Ekam is concerned that she may one day find herself in a precarious situation. Nehmat is reminded of an FB. Nehmat, the little girl who is upset, tells Fateh that Tejo reprimanded her for fighting back against a guy who had ridiculed her before. Nehmat is sobbing. Nehmat is calmed down by Fateh, who reassures her that he will take care of the situation.

FB finishes. Nehmat assures Ekam that he is there to take care of her at that moment. Mallika visits Nehmat at her home, and the two of them have a conversation. It is there that Naaz comes. She puts up a pleasant front and offers Nehmat her earrings, claiming that they would look wonderful with the outfit that she is wearing.

She wonders whether it is possible for her to accompany Nehmat to the party, given that those who were invited are allowed to bring one guest with them. Nehmat has indicated that she will be accompanying Ekam on this trip; however, Mallika will be traveling alone. Mallika claims that she, too, has a significant other. Nehmat inquires as to his identity. According to Mallika, her closest pals are the only ones who know her secrets.

Nehmat pulls Mallika aside and inquires about the person who will be coming to the party with her. Mallika asserts that nobody knows that she lied in order to prevent Naaz from accompanying her to the party. Nehmat has compassion for Naaz and urges Mallika to save her by taking her under her wing. But Mallika says no and reminds her that Naaz attended additional lessons with the professor who they outed, and that if she attends the party, everyone will talk about how the two of them were involved in the scandal. Nehmat has the same sentiments as Mallika. Naaz overhears them as they are speaking. She makes up her mind that she will go to the party.