When Rashmi and Sayuri are disagreeing, Saroj stirs up mischief. Rashmi has an emotional breakdown at the time when Krishna is consoling Sayuri. 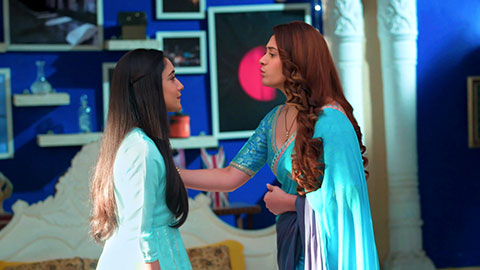 Get the written update for the newly released section of the pleasant TV broadcast Woh To Hai Albela delivered on Tuesday, 13th September 2022. Rashmi, Sayuri’s Differences is the moniker of the new episode number S1 E138.

Sayuri apologizes for being late at the beginning of the episode. Kusum stands up for Sayuri despite Saroj’s insults. Sayuri is made fun of by Saroj. Saroj doubts Sayuri’s motivations despite Kusum’s attempts to stop her.

She claims Sayuri stole their company out of retaliation for taking her father’s rights. When Dhanraj remembers Saroj’s comments, he and Kanha are talking business. According to Dhanraj, Saroj didn’t like Sayuri handling the company. He requests that he always maintain his values and speak up for what is right.

Kusum attempts to stand up for Sayuri, while Saroj keeps blaming her family. Sayuri requests that she not discuss this with her grandmother or mother. She claims that they had never thought of such plans before. When Sayuri becomes perplexed, Saroj abruptly begins to seem innocent.

When Rashmi mentioned Sayuri as impolite to Saroj, she inquired what she was saying. In contrast to other home areas, Saroj believes that only her wishes are fulfilled in the kitchen. Rashmi claims that she could have done it politely if she had wanted to say anything. Sayuri misinterpreted Saroj’s request for relaxation since she had already felt a lot of strain from her job, but Saroj was lying.

Kusum was astounded by the way Saroj had altered her remarks. She is asked to go by Rashmi so that she may assist Kusum and Saroj. Sayuri departs furious. When Sayuri emerges, Kanha welcomes her with a hug and comforts her.

Though Sayuri begs him not to misunderstand, what she wants is to reconcile with Saroj. She claims that her father also wants her to take care of the company since he and Dhanraj handed it to her. She then inquires about what she may do after stating that she also wants some help from Saroj. Kanha asks her to be silent.

He asserts that it is sometimes preferable to remain silent to prevent issues. When Rashmi arrives, Kanha approaches her, but Sayuri stops him, pleading with him not to. Kanha apologizes for interfering with the sisters’ private affairs and claims that a few issues must be resolved right now. He approaches Rashmi and advises her to place her sister as her primary source of trust.

He requests that they discuss their disagreements and find a solution. Sayuri departs with Rashmi. Kanha, who is leaving mocking her, receives Prasad from Saroj. Sayuri is becoming more despised by Saroj.

Rashmi accuses Sayuri of engaging Kanha in her sister’s case. She ignores her and keeps blaming her for disrespecting Saroj. Sayuri’s charges will surprise her. Rashmi will hear her state that she has always regarded Saroj as her mother and would do so.

Rashmi storms out indignantly as she tells her to believe anything she wants to. Dhanraj clarifies that only Sayuri and Kanha would create the Ganesh idol when Saroj purchases the mud for it. Saroj wants Rashmi and Nakul to make it instead. Kanha hugs Sayuri when she notices that she is distressed.