While Saroj is trying to antagonize the employees, Sayuri is there to cheer them up, which helps Sayuri avoid an awkward scenario. In another part of the story, Rashmi and Nakul are seen out shopping. 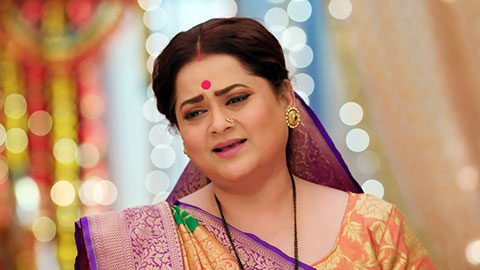 Let us explore the written update for the newest chapter of the consuming serial Woh To Hai Albela provided on Friday, 23rd September 2022. Saroj Manipulates the Workers is the moniker of the revolutionary episode number S1 E147.

Sayuri and Kusum begin the episode by working in the kitchen. Sayuri is concerned about her ability to complete the task. Kusum says she understands her worry. She claims that as a woman, she is subjected to additional pressure to prove herself to Saroj. She assures her that everything will be well.

She instructs her to take care of the ladies while she prepares the tea. Saroj hears everything. Nakul questions Dhanraj about the ladies’ ghunghats. Dhanraj claims that it is their custom. He claims that some individuals stubbornly adhere to the old traditions even though things have changed dramatically.

Dhanraj requests that Nakul contact Kanha, and he video calls him. Kanha chastises him for upsetting Rashmi with his vlog. Rashmi’s strange conduct, according to Nakul. Kanga claims that when females move from one home to another, they have their anxieties. He claims that the period between engagement and marriage is challenging for them and that he wants to understand why.

Kanha requests that he take Rashmi out since he is now completely free. Nakul expresses concern that he would be required there, but Kanha urges him to make Rashmi understand. Kanha promises to return shortly. Sayuri is taken aback when her staff brings her tea in disposable cups. When Kanha video calls her, she feels ashamed handing it to the ladies.

He converses lightly with the ladies, which brightens the atmosphere. Sayuri praises Kanha for the same, and Kanha inquires if there is something wrong. Sayuri conceals it from him. When Nakul signals Rashmi for a coffee date, Sayuri is working with the ladies. They both depart, while Saroj orders Kusum not to prepare for the ladies.

Kusum corrects her behavior and begs her to respect others who are there to assist them. She claims Sayuri is sacrificing her life to ensure the project’s success. Sayuri leaves after hearing their conversation. Rashmi and Nakul are shopping for gems, but Nakul is uninterested. Rashmi is furious, but Nakul claims it’s all new to him and urges her not to misunderstand.

Rashmi envies Sayuri as he waits outside. Sayuri is preparing a meal for the ladies with Indrani and Dadi. The women begin to feel hungry. Saroj incites the women against Sayuri, painting her as an awful, disgusting lady who served them tea in paper cups. Sayuri is excitedly preparing lunch for the ladies.